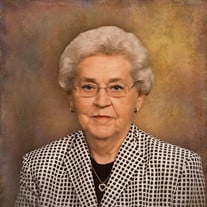 To view the service for Mrs. Williams please select this link Mrs. Wynette Nash Williams, age 94, of Snellville, Georgia was called home by her Lord and Savior on Monday, February 7, 2022. She passed away peacefully at Dogwood Forest with family by her side. She is survived by her loving and devoted husband of 77 years, Mr. Dennis Clyde Williams; sons & daughters-in-law, Ronald Dennis “Ron” Williams & wife, Connie Gartrell Williams and Steven Wayne “Steve” Williams & wife, Sherry Moon Williams all of Snellville, GA; five grandchildren and spouses, Ronald “Todd” Williams (Hillary) of Peachtree City, GA, Tracy Williams Moore (Matthew) of Chattanooga, TN, Heather Williams Krissel (Scott) of Grayson, GA, Holly Williams Hollandsworth (Ryan) of Bogart, GA, Hailey Williams Scott (John Neal) of Roswell, GA, thirteen great grandchildren, Parker Williams, Ellie Williams, Caroline Moore, Sarah Moore, Hadley Hollandsworth, Reese Hollandsworth, Harper Hollandsworth, Hudson Krissel, Sutton Krissel, Madison Krissel, Emery Jane Scott, Amelia Scott, and Nash Scott; sister, Pat Nash Wood of Dunwoody, GA; sisters-in-law, Carolyn Williams Hood (Ken) of Snellville, GA, Nancy Spears Williams of Snellville, GA, Hazel Williams Moon of Monroe, GA; nieces, nephews, other family members, and a host of many friends. The family would like to extend a special thank you to Geraldine McCaa for the love and care she provided to Mrs. Williams and more recently to the entire staff at Dogwood Forest Assisted Living in Grayson. Mrs. Williams was preceded in death by her parents, Odos and Willie Smith Nash; father & mother-in-law, Clyde and Vera Brownlee Williams; siblings, Cecil Nash (Mildred), Dennis Nash (Miriam), brothers-in-law, Carvis Williams, George Moon, Lamar Williams (Mary), and Homer Wood. Mrs. Williams was born on May 26, 1927 in Grayson, Georgia. She was a 1944 graduate of Snellville High School where she and Dennis went to school together since the first grade. They were married on September 16, 1944 and have been married for 77 years. She worked for First National Bank of Lawrenceville for 25 years. She loved to sew, cook and garden. She was a devoted wife, mother, grandmother, great grandmother, daughter and sister. Her family was everything to her and she was so proud of every event they participated in over the years. She supported and cared for her beloved husband, Dennis throughout his many years working and they always were active in their faith by attending the First Baptist Church of Snellville their entire lifetime. Due to COVID-19 regulations, and the various variants, the staff of Tom M. Wages is committed to taking care of the families we serve and their guests. We ask all family members and guests to social distance, bring a mask and wear as you so desire. The Service to Honor and Pay Tribute to the Life of Mrs. Wynette Nash Williams will be held on Sunday, February 13, 2022 at 2:30 P.M. at Tom M. Wages Snellville Chapel with Pastor Brian Boyles officiating with Family Memories Shared. Interment will follow at the Snellville Historical Cemetery. The family will receive friends on Sunday from 12:30 P.M. until the hour of the service at the funeral home. Those desiring may make memorial gifts to the First Baptist Church of Snellville, 2400 East Main St., Snellville, GA 30078 in memory of Mrs. Wynette N. Williams. Condolences may be sent or viewed at www.wagesfuneralhome.com. Tom M. Wages Funeral Service, 3705 Highway 78 West, Snellville, GA 30039 (770-979-3200) has been entrusted with the arrangements.

The family of Wynette Nash Williams created this Life Tributes page to make it easy to share your memories.

To view the service for Mrs. Williams please select this link

Send flowers to the Williams family.