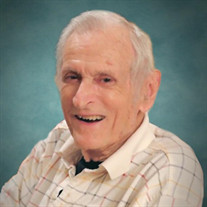 Winston Eugene Parker, age 96, of Snellville, GA passed away on Monday, March 23, 2020. Winston was preceded in death by his wife, Bertha Mae Ulrich Parker; and brothers, Orville W. Parker, Thomas C. Parker, Guy W. Parker, James R. Parker, and H. Patterson (Pat) Parker. Winston is survived by his daughter, Jenny Kasmiskie; son-in-law, Kent Kasmiskie; granddaughter, Caroline Burgess (husband James Burgess); grandson, Jesse Kasmiskie; granddaughter, Julia Kasmiskie; sister, Rachel Power; many nieces, nephews, and a host of other relatives. Winston was a native of East Point, GA, where he lived for 49 years. He was also a resident of Snellville, GA for 47 years. Winston attended Russell High School, East Point, GA and Woodrow Wilson Law School Atlanta, GA. He was a member of the Greatest Generation, serving in the US Army as a staff sergeant, during World War II, in the European Theater in Belgium, Holland, Germany, and France. Much of his career was spent working for the City of College Park, as the Urban Renewal Director and City Clerk, and for the Fulton County Government as Head of the Land Department. He was a member of Berean Baptist Church, Lilburn, GA. Winston enjoyed working in his yard, spending time with his grandchildren, going to the Tennessee and Kentucky mountains, enjoying time by the Little River at Elkmont Campground, and having a “BLT and decaf coffee” with his friends at the Little Barn, in Lawrenceville, GA. He was friend to many, a true Southern Gentleman, and the rock of his family. He is enjoying life in Heaven now with his Savior and family and friends from a full life, free from the limitations of this world. A private graveside service was held at College Park Cemetery, College Park, GA. The memorial service will be held on Saturday, September 26, 2020 at 11:00 AM at Berean Baptist Church, 1405 Hewatt Rd SW, Lilburn, GA 30047. In lieu of flowers, memorial donations may be made to the Berean Baptist Church Benevolence Fund which is used to help people in need in our community. Condolences may be sent or viewed at www.wagesfuneralhome.com. Tom M. Wages Funeral Service, LLC, A Family Company, 3705 Highway 78 West, Snellville, GA 30039 (770-979-3200) has been entrusted with the arrangements.

The family of Winston Eugene Parker created this Life Tributes page to make it easy to share your memories.

Send flowers to the Parker family.