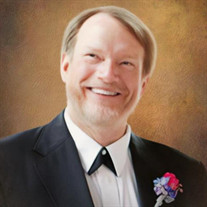 Click to view livestream William “Bill” Merle Wood was born February 25, 1958 in Danville, IL. He went home to be with the Lord on Wednesday, July 21, 2021 after suffering a sudden massive heart attack at his home in Cleveland, GA. He was preceded in death by his father, Harry W. Wood of Danville, IL; as well as his parents-in-law, Richard and Martha Canaday of Stone Mountain, GA. He is survived by his wife of 40 years, Patricia “Trish” Canaday Wood; his daughters, Rebekah Wood of Cleveland, GA and Desiree Brazas (James) of Hanover, MD; his mother, Emma Wood of Danville, IL; his sister, Cheryl Browning (Jim) of Westfield, IN; niece, Dawn Pasquale (Doug, Maddie, and Brandon) of Zionsville, IN; and nephew, Jim “Bo” Browning (Marsha, Veronica, Sam). He is also survived by brothers-in-law, Rick (Bonnie) Canaday, David Canaday, and Frank (Karen) Canaday; sister-in-law, Shirley Canaday; and many nieces, nephews, and other extended family and friends. Bill grew up in Danville, IL and graduated from Bismarck High School in 1976; while finishing high school, he worked as an intern with local veterinarian Doc Heffernan, whose mentorship instilled in him the value of building solid relationships with clients. He attended Bob Jones University for 2 years, during which he met the love of his life, Trish, in biology lab class and then went on a summer mission trip to the Philippines before getting engaged on Christmas in 1978. He returned to Illinois and worked for the L&N Railroad for several months before moving to Georgia in April 1979, where he started working in construction. He and Trish were married at Killian Hill Baptist Church in Lilburn, GA on June 6, 1981, and afterwards they lived in Colbert, GA, where he worked on a cattle farm and attended classes at UGA. In 1983, they moved back to the Snellville, GA area, where Bill continued working in construction and then facilities maintenance at Killian Hill Baptist Church and Christian School. After the birth of Rebekah in 1988, Bill started doing home remodeling and repair for his own clients in addition to working at the school, and he continued to grow his client base. Desiree came along in 1991, and in 1998 Bill started working full-time with his own home remodeling and repair business, Dewbear Homecraft. In 2004, Bill began working as a consultant and contractor liaison with UBuildIt. In 2008, he returned to operating Dewbear Homecraft full-time. Over the decades, Bill formed deep and lasting friendships with his clients, and they became another extension of his family. Operating his own business granted Bill the flexibility to enjoy many wonderful adventures with his girls, such as camping, hiking, whitewater rafting, hunting, fishing, and exploring interesting little towns; some of his favorite trips included canoeing through the Okefenokee Swamp and backpacking on Cumberland Island with Desiree, sitting in a deer stand watching the woods wake up and canoeing down the Chestatee River with Rebekah, and most recently visiting Savannah, GA with Trish to celebrate their 40th wedding anniversary. Former trips Bill recently started wanting to plan again were his favorites to Montana and Maine. Bill loved the Lord, his family, his friends, his clients, his animals, and never got tired of the view from his mountain house. He was an amazing storyteller and craftsman, and his quiet wisdom and sense of humor enriched the lives of everyone who met him. Above all else, he lived justly, loved mercy, and walked humbly with his God. A funeral service will be held on Tuesday, July 27, 2021 at 1:00 PM at Tom M. Wages Snellville Chapel. The family will receive friends on Monday, July 26, 2021 from 4:00 PM until 7:00 PM at the funeral home. A private burial will take place at a later date. “If you wish to make a donation in honor of Bill, please consider the construction project at The Woodlands camp in Cleveland, Georgia.” You can view the service, which will be livestreamed, either by going to the Tom M. Wages Facebook page or by clicking the blue link, on the obituary page, on our website. Due to COVID-19 regulations, our staff is committed to taking care of our guests and families that we serve. We also ask all guests and family members attending visitations and services to please continue social distancing and if desired to bring and wear a mask. Condolences may be sent or viewed at www.wagesfuneralhome.com. Tom M. Wages Funeral Service, A Family Company, 3705 Highway 78 West, Snellville, GA 30039 (770-979-3200) has been entrusted with the arrangements.

The family of William "Bill" Merle Wood created this Life Tributes page to make it easy to share your memories.

Send flowers to the Wood family.