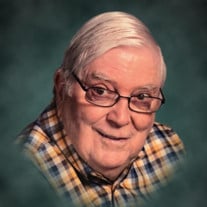 To view the service of Walter via Livestream, please click the blue link. https://view.oneroomstreaming.com/authorise.php?k=1638980916152705 Walter D. Davis, age 81 of Lawrenceville, GA, passed away Friday, December 3, 2021. Walt was preceded in death by his parents, James and Veda (Packard) Davis, and his brother, James “Jim” Earl Davis, from Kansas. Walt is survived by his wife, Linda Scarborough Davis; his two sons, Richard “Rick” (Cheryl) Davis and Christopher Davis; grandchildren, Tyler and Samantha; and numerous nieces and nephews. Walt was a native of Ardmore, OK and grew up in Kansas. Walt served in the U.S. Air Force from 1957–1961 and later moved to Minnesota before finally landing in Georgia. He was a member of Lawrenceville First Baptist Church and active in the Fellowship Sunday School class. He enjoyed gardening, his cats, and trying new restaurants with his wife and friends, Judie and George. He also was close with his brother Earl, and they talked daily until Earl’s death. A Celebration of Life Service will be held for Walter Davis at 1:00PM on Wednesday, December 8th, 2021 at Tom M. Wages Lawrenceville Chapel with interment following at Gwinnett Memorial Park. The family will receive friends on Wednesday, December 8th, 2021 from 12:00PM until the hour of service at Tom. M. Wages Lawrenceville Chapel. Officiating the service will be Rev. Inman Houston of Lawrenceville First Baptist Church. In lieu of flowers, donations may be made to Lawrenceville First Baptist Church, at http://lawrencevillefirst.org/donate, (770) 963-5121, 165 S Clayton St, Lawrenceville, GA 30046, Condolences may be sent or viewed at www.wagesfuneralhome.com. Tom M. Wages Funeral Service, 120 Scenic Hwy., Lawrenceville, GA 30046 (770-963-2411) has been entrusted with the arrangements.

The family of Walter Davis created this Life Tributes page to make it easy to share your memories.

To view the service of Walter via Livestream, please click the...

Send flowers to the Davis family.