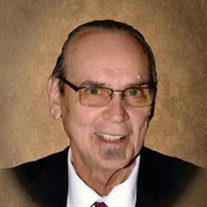 To view the service of Gene via Livestream, please click on the blue link; https://view.oneroomstreaming.com/authorise.php?k=1644889791166888 Thomas “Gene” Cox of Lawrenceville, Georgia entered into rest on Friday, February 11, 2022. He was 75 years old. He was preceded in death by his father, Harold Cox, and his wife Barbara Greeson Cox. Gene was the first born to Harold and Coeleanor “Tody” Cox. He was a 1964 graduate of Dacula High School. He was an amazing athlete and was scouted as a baseball pitcher. Gene was a member of the very first football team at Dacula High School. His first job was with his father at General Motors for a short time. His brother in law, Edwin would next introduce him to the printing business and so began his printing career that spanned 30+ years. He started at Foote & Davies as a pressman. Foote & Davies would later be purchased by IPD Printing which would be purchased by RR Donnelly. He would remain a dedicated employee through all of those changes. He loved his job and enjoyed the company of his work friends. Gene was an avid and competitive golfer. He thoroughly enjoyed spending time on the golf course with his friends over the years at Pine Ridge, Spring Brook, Honey Creek and many other courses across the southeast. For a time, he also enjoyed a hobby in the sport of enduro racing with his lifelong friend Sammy Wall. Gene raced the motorcycles and Sammy was the photographer. Gene, Linda, Sammy & Patsy would load up the gear and the kids for fun weekends at the track. Another hobby he enjoyed was ham radio operator. His handle was Windy Hill. He enjoyed connecting with people from around the world when at home on the radio, and had fun talking it up with truckers when he was on the road. Gene married Barbara in a Vegas wedding in April 1998. They enjoyed fun dinners out with friends, long weekends at golf tournaments, traveling together to the mountains, going on cruises, and going to casinos. They most enjoyed spending time with their grandchildren. They were married for almost 10 years before Barbara’s death in 2007. Gene’s most treasured titles were those of “Daddy” and “PawPaw”. He was very proud of his children Gina, Gary & Gerald. And he loved his grandchildren Austin, Chandler, Allie & Leah very much. Survivors include: mother Coeleanor “Tody” (Hall) Cox - Dacula, brother Bruce Cox - Dacula, daughter Gina (Andy) Bragg - Jefferson, son Gary (Katrina) - Blairsville, son Gerald (Daphyne)- Blairsville, and Gina, Gary, and Gerald’s mother, Linda Hawkins of Orlando FL. Grandchildren Austin, Chandler, Allie, Leah. Nephews Justin & Philip, many cousins with whom he always had a good time, former work friends, and many golf buddies. Due to the current COVID-19 regulations, and different variants, our staff is committed to taking care of the families we serve and the friends who support them. We ask all family members and friends attending the visitation and service, to please continuing social distancing and bring & wear a mask as you feel inclined. The Service to Honor and Celebrate the Life of Gene Cox will be held on Wednesday, February 16, 2022 at 11:00 A.M. at Tom M. Wages Lawrenceville Chapel with Derek Spain and Andy Bragg officiating. Interment will follow at Ebenezer Baptist Church Cemetery in Dacula. The family will receive friends on Tuesday, February 15th from 4:00 P.M. to 8:00 P.M. at the funeral home. In lieu of flowers, memorial gifts can be made to your favorite charity of choice in memory of Thomas Gene Cox. Condolences may be sent or viewed at www.wagesfuneralhome.com. Tom M. Wages Funeral Service, 120 Scenic Highway, Lawrenceville, GA 30046 (770-963-2411) has been entrusted with the arrangements.

The family of Thomas "Gene" Cox created this Life Tributes page to make it easy to share your memories.

To view the service of Gene via Livestream, please click on the...

Send flowers to the Cox family.