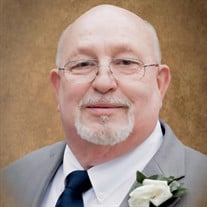 Please click here to view the service of Dr. Terry Buice Livestream Dr. Terry L. Buice, Chaplain, Gwinnett County Comprehensive Correction Center, age 72, of Hoschton, Georgia, went home to be with his Lord and Savior on Monday, January 25, 2021. He is survived by his wife of 9 years, Elaine Buice; daughter and son-in-law, Anita Buice Stephens (Brian) of Buford, GA; Grandchildren, Austin Stephens (Amalea) of Covington, GA, and Breanna Stephens of Buford, GA and Great-granddaughter Ivy Stephens of Covington, GA, sisters and brothers-in-law, Teresa Buice Bottoms (Bob) of Loganville, GA, Susan Buice Childs (Jim) of Winder, GA; brother and partner, Kevin Buice (John Foley) of Alexandria, VA; nieces, nephews, other relatives and a host of many friends. Terry was preceded in death by his mother, Betty Piper Buice on December 20, 2019; father Bobby L. Buice on March 24, 2013 Terry was born in Atlanta, GA on February 27, 1948 and graduated from Bass High School. He was a veteran of the United States Navy serving during July of 1968- July of 1972. Dr. Buice (Chap) served as Chaplain for over thirty years at the Gwinnett County Comprehensive Correction Center in Lawrenceville, Georgia and I.W. Davis Probation Detention Center in Jefferson, Georgia. As Chaplain, he ministered to inmates’ spiritual and emotional needs, while leading many to Christ. Terry was Founder and Executive Director of Barnabas Ministries, Inc. which was launched in 1992. The ministry follows the example of the Bible’s Barnabas, whose name meant “son of encouragement.” In Terry’s ministry he “encouraged” men who were in prison to live up to their potential and oversaw inmates’ transition from prison back to civilian life. Terry attended Gwinnett Hall Baptist College receiving his Doctor of Theology (Th.D.), or also known as Doctor in Biblical Education (D.B.E.). Terry was also a member of the Georgia Sheriff’s Association, Chaplain Division, as Master Chaplain, and was a Volunteer Chaplain for Northeast Georgia Hospital in Winder. Dr. Buice went on mission many times to The Angola Prison, officially known as “The Louisiana State Penitentiary”, when Burl Cain was the Warden. Dr. Buice was moved by the development of innovative programs at Angola focused on an offender’s reentry in their community upon release from prison. The Angola Museum, which was established in 1998 by Warden Cain, is dedicated to preserving Angola’s history and success in developing men to be an asset to their community. Terry had a magnanimous personality and made time to spend with anyone that needed help in finding their Lord and Savior. Terry will be deeply missed by his adoring family and the many lives that he touched during his ministry. Due to the current COVID-19 regulations, our staff is committed to taking care of the families we serve and the friends who support them. A Private Family-Only Service will be held on January 29, 2021 at 2 PM at Tom M. Wages Lawrenceville Chapel with Gary Phillips and Austin Stephens officiating. We ask all family members attending the services to please bring and wear a mask. It is important to the family that all who loved Terry join them in his celebration of life service and invite you to join them via a livestream of the service at the following link: https://www.oneroomstreaming.com/view/authorise.php?k=161178489097612 Interment will follow at Mt. Zion Baptist Church Cemetery. The family has requested that memorial gifts be made to Toccoa Christian Church PO Box 942 Toccoa, GA 30577 or The Georgia Sheriff’s Association https://georgiasheriffs.org/index.php/tribute-donation 3000 highway 42 North McDonough, GA 30253 in memory of Dr. Terry L. Buice, Chaplain. Condolences may be sent or viewed at www.wagesfuneralhome.com. Tom M. Wages Funeral Service, “A Family Company,” 120 Scenic Highway, Lawrenceville, GA 30046 (770-963-2411) has been entrusted with the arrangements.

The family of Dr. Terry L. Buice, Chaplain created this Life Tributes page to make it easy to share your memories.