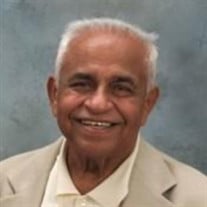 Soman (Somasekharan) Nair age 85 of Winder, GA, passed away peacefully at home on Sunday, January 16, 2022. He was preceded in death by his parents Ramachandran and Janaki Nair and his three brothers. He is survived by his devoted wife of over 51 years, Joan (nee Watkins); his dedicated daughter and son-in-law Supriya and Andrew Kenerly; and his greatest joy, grandson Jackson Kenerly of Winder, Georgia. He is also survived by his niece Dr. Ambika Nayar; nephew Rajesh Nayar of New York, NY; and several other relatives. As a young man, Soman came to the United States from Kerala State, India in the 1960s and fell utterly in love with New York, where he lived for over fifty years. He worked in the Indian Consulate, where he met his Joan. He was immediately smitten with her and her dangling blue and silver earrings. Living in New York, he enjoyed everything New York had to offer--the vibrancy, the food (after he got past his initial hesitation to try a hot dog), and the people. How he loved people! Soman was involved with several organizations to promote introducing and preserving Indian culture and customs in New York. But living in New York, Soman would embrace opportunities to be around all kinds of people. He enjoyed several jobs, including being a cab driver, owning an Indian restaurant and later becoming a security guard at the Museum of Modern Art until he retired in 2009. When Soman’s health declined in early 2017, Supriya and family brought both Soman and Joan to live with them in Georgia. Soman was thoughtful and kind. He loved to see the people around him happy. And overfed. The highlight of his life was the birth of his grandson Jackson. Even in the last days, Soman would always ask, “How is Jack?” “Pupa” as Jackson called him, was content knowing his grandson was well. We celebrate that Soman lived a life the way he was-wonderful, simple, and joyful. The family is thankful for the team at Bristol Hospice. Their compassion and help were a comfort for us all. Soman left this world in peace knowing that he was deeply loved and cared for by his family. Services for Soman Nair will be held at a later date. Please check back at another time. Condolences may be sent or viewed at www.wagesfuneralhome.com. Tom M. Wages Funeral Service, 120 Scenic Hwy., Lawrenceville, GA 30046 (770-963-2411) has been entrusted with the arrangements.

Soman (Somasekharan) Nair age 85 of Winder, GA, passed away peacefully at home on Sunday, January 16, 2022. He was preceded in death by his parents Ramachandran and Janaki Nair and his three brothers. He is survived by his devoted wife of over... View Obituary & Service Information

The family of Soman Nair created this Life Tributes page to make it easy to share your memories.

Send flowers to the Nair family.