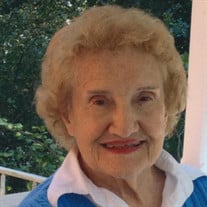 Sarah Bess Stone Roach Martin passed away peacefully Tuesday, August 3, 2021 at Benton House of Grayson Memory Care Facility in Grayson, GA. Mrs. Martin was born October 10, 1922 and was 98 years old. She lived a long, full life. She was preceded in death by her husband of 50 years, Lt. Commander James R. (Dick) Martin; a daughter, Deborah Anne Roach; her step-daughter, Kathie Martin Dudley of North Carolina; and her daughter-in-law, Annie Freeman Roach. Mrs. Martin is survived by her three children, Ruth Roach Martin (Jackie), Bill Roach (Mary Sue), and John Roach; and three step-children: James R. Martin, Jr. (Suzanne), Clayton S. Martin (Kimberly), and Ruth Elizabeth (Liza) Martin Terrl (George); along with 14 grandchildren; step-grandchildren; numerous great-grandchildren and step-great-grandchildren; and nieces and nephews. She was the youngest of eight siblings all of whom preceded her in death. Mrs. Martin was born in Pineville, KY and graduated from Berea College in Kentucky. During World War II, she read weather maps for the US Army. She spent the majority of her adult life as an educator in Charleston (SC) County Public Schools, specifically James Island High School, Ft. Johnson High School, and W. Gresham Meggett High School. She taught General Science, Chemistry, and Home Economics at different times in her career. She touched the lives of literally thousands of young people, throughout her career. Her life also included many charitable activities, including Habitat for Humanity and her local church on both James Island (Ft. Johnson Baptist Church) and in Waynesville, NC, where she and her husband lived for over 20 years. They loved to travel and visited many countries, throughout the years. Mrs. Martin was an avid quilter and made numerous quilts for her children, grandchildren, and great-grandchildren, and many others. In her later years, she has lived at Benton House of Grayson, both in assisted living and in the memory care unit, sharing her characteristic smile and her love for the Lord. A celebration of her life will be held Saturday, August 7 at 2:00 pm at Anchor Church, 451 Ozora Road, Loganville, GA 30052. The service will be broadcast electronically for those prefer to be there virtually. Burial will be held in Pineville, KY for family at a later date. Condolences may be sent or viewed at www.wagesfuneralhome.com. Tom M. Wages Funeral Service, 3705 Highway 78 West, Snellville, GA 30039 (770-979-3200) has been entrusted with the arrangements.

The family of Sarah S. Martin created this Life Tributes page to make it easy to share your memories.

Send flowers to the Martin family.