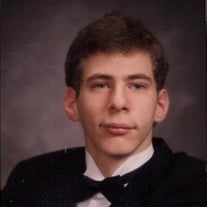 On February 28, 2022, Ronald Preston Peterson left this world after a persistent, life-long struggle with generalized dystonia. Ron was the son of Reid Willis and Virginia (Gini) Hubbard Peterson. He was born in Norfolk, Virginia and moved to Georgia when he was four years old. Currently, he was a member of St. Bartholomew’s Episcopal Church in Atlanta and previously of St. Edward the Confessor Episcopal Church in Lawrenceville and St. Matthew’s Episcopal Church in Snellville. Ron graduated from Berkmar High School in 1987 and left for St. Andrew’s Presbyterian College in Laurinburg North Carolina where he earned a degree in Chemical Physics and Mathematics with a Computer Emphasis. He continued his advanced education at the University of Tennessee in Knoxville where he held a teaching assistant position in the Chemistry Department. Not content to stop there, he earned a MS in Computer Science from Georgia Institute of Technology and a MS in Public Health from Emory University even as he began his twenty-six year career at the Centers for Disease Control (CDC) as a computer specialist. He loved and was dedicated to his job and worked until the last morning of his life. He completed a four year course, Education for Ministry (EfM), from the School of Theology at the University of the South in Sewanee, Tennessee. In addition to his parents, he is survived by his aunts and uncles, Nelda (Robert H.) Wilson of Burnsville, NC, Patricia (Randy) Buchanan of Johnstown, PA, James Rachael of Dunlo, PA, The Rev. Herbert (Shirley) F. Hubbard, Jr. of Pooler, GA, and Ronald (Carol) A. Peterson of Gretna, VA; first cousins, Gay Borland, Burnsville, NC, Iris Leong, Chesapeake, VA, Joan Clark, Reidsville, NC, Robert E. Wilson, Waddell, AZ, Stuart R. Wilson, Vicenza, Italy, Laura Maher, Burnsville, NC, Kathryn M. Peterson, Houston, TX, James M. Hubbard, Richmond Hill, GA, Jeffry S. Hubbard, Guyton, GA, Joy K. Spidle, Pooler, GA, Amber R. Gifford, Santa Clarita, CA, Amy Freeman, Bumpass, VA, James Rachael, Clearwater, FL, and Christopher Rachael, Savannah, GA. He is also leaving behind longtime friends Sigrid Economo, Snellville, GA, Thomas Maher, Burnsville, NC, Laura C. Wilson, Burnsville, NC, his faithful Kitty, Milo, of Stone Mountain, GA; and many extended family members, cousins and friends. Ron’s perseverance was an inspiration to many. An example: at seven he insisted on playing Little League Baseball and assured us, “I’m a big brave boy”. Among other interests, Ron was an avid reader and a participant in wheelchair sports including bocce, soccer, and swimming, even traveling to Japan for an International Disabled Athletes’ Camp and to Michigan State University for the United Cerebral Palsy Games. He enjoyed going to Camp Mikell, Warm Springs and Easter Seal Camp. Going to the Fox and concerts brought him great joy. He was active at church where he taught Sunday School (St. Matthew’s), volunteered in the church office (St. Matthew’s), and served on the vestry (St. Bartholomew’s). He appreciated the good care and encouragement he received from those at Albert’s House, Milton Senior Living, Agape Hospice, and Emily Wright, as well as the clergy and parishioners of St. Bartholomew’s and St. Matthew’s Episcopal Churches. Please remember Ron as a good, kind man who lived life to the fullest he could and held no rancor toward anyone. The memorial service to celebrate the life of Ronald “Ron” Preston Peterson will be held on Saturday, March 19, 2022 at 11:00 AM at St. Matthew’s Episcopal Church, Snellville, GA. The family will receive friends on Saturday, March 19, 2022 prior to the service from 10:00 AM – 11:00 AM at the church. In lieu of flowers please consider a donation to Dystonia Medical Research Foundation, 1 E Wacker Dr. Ste 1730, Chicago, IL 60601-9553. Condolences may be sent or viewed at www.wagesfuneralhome.com. Tom M. Wages Funeral Service, A Family Company, 3705 Highway 78 West, Snellville, GA 30039 (770-979-3200) has been entrusted with the arrangements.

On February 28, 2022, Ronald Preston Peterson left this world after a persistent, life-long struggle with generalized dystonia. Ron was the son of Reid Willis and Virginia (Gini) Hubbard Peterson. He was born in Norfolk, Virginia and moved to... View Obituary & Service Information

The family of Ronald Peterson created this Life Tributes page to make it easy to share your memories.

Send flowers to the Peterson family.