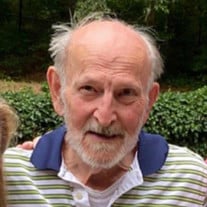 Roger Allan Ziecker, age 85, of Lawrenceville, GA passed away Thursday, June 24, 2021. He is survived by his loving wife, Lorraine; daughter, Laina J. Palmeri; son, Steven Ziecker; grandsons, Zachary Hamilton and Chase Hamilton; nieces, Linda Hall, Cindy Annino; and nephew, Michael Gerken. He was preceded in death by his parents, Elmer Ziecker and Evelyn Kubli Ziecker; and sister, Marilyn A. Gerken. Roger was born in Buffalo, NY on March 13, 1936. He proudly served his country in the United States Air Force for 8 years. Roger married Lorraine Lauer on November 20, 1965 and they celebrated their 55th wedding anniversary. He was employed as a Senior Designer for Nordson Corp before retiring. Roger was a devoted and caring husband, father, grandfather, brother and uncle who will be deeply missed. No services have been scheduled at this time. Condolences may be sent to or viewed at www.wagesfuneralhome.com. Tom M. Wages Funeral Service LLC, “A Family Company”, 120 Scenic Hwy Lawrenceville, GA, 770-963-2411, has been entrusted with the arrangements.

The family of Roger Allan Ziecker created this Life Tributes page to make it easy to share your memories.

Send flowers to the Ziecker family.