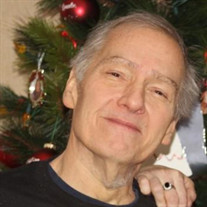 Robert (Bob) Simpson aged 64 of Loganville, Georgia, passed away on April 6, 2022. He was preceded in death by his father, Hugh Edward Alexander Simpson, Sr.; his brother, Hugh Edward Alexander Simpson, Jr.; and his wife of 27 years, Sarah E. (nee Roberts) Simpson. He is survived by his mother, Joan (nee Sellwood) Simpson, aged 99; and his sister Marilynne Jean (nee Simpson) Orlando. Bob was born and raised in the boroughs of New York City. After surviving the public-school system of New York, he attended Queens College and received a Bachelor of Arts Degree in International Affairs. He enlisted in the United States Army in 1980. Not completely tired of schooling, he was enrolled and graduated from the Command and General Staff College at Ft. Leavenworth, Kansas. He served with distinction in the armored and Calvary divisions. He was Honorably Discharged in 1992. Bob has always been interested in international affairs and in providing interpretations of how nation-states react based on their regional history over time. While serving his Country, Bob married Gracie Simpson and Mary C. Simpson. After the Army, Bob moved to the St. Louis, Missouri area and eventually met his third and final wife, Sarah. Together they raised her son Robert (Rob) Simpson and Sarah’s niece Jessyca Baker and nephew Joseph Baker. He was pivotal in the development of the three and due in part to his influence, they have grown into wonderful adults. Bob and Sarah moved to Loganville, Georgia when the kids were grown and retired there. Eventually they were joined by his mother, Joan. Bob and Sarah have always surrounded themselves with a menagerie of animals, both living and stuffed, and Bob was well known for providing humorous personalities for the stuffed ones. We will miss his joy, intelligence, dry humor and his (mostly) inner child. There are no services planned for Robert Simpson at this time. Condolences may be sent or viewed at www.wagesfuneralhome.com. Tom M. Wages Funeral Service, A Family Company, 3705 Highway 78 West, Snellville, GA 30039 (770-979-3200) has been entrusted with the arrangements.

The family of Robert William Simpson created this Life Tributes page to make it easy to share your memories.

Send flowers to the Simpson family.