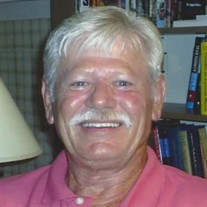 [Please click here to view the livestream of Robert's service] https://view.oneroomstreaming.com/authorise.php?k=1617490221108978 Private funeral services will be held Tuesday, April 6th for Robert Peterson who died Wednesday after losing his battle with cancer. He was 78 years old. Robert hailed from Tribune, Kansas, the son of Hugo and Beulah Peterson. He attended Greeley County High School graduating in 1960. After college, Robert joined the US Army and served in combat operations in Vietnam as an Infantry Platoon Commander and Huey helicopter pilot with the fabled 9/1 First Cavalry Division Headhunter Squadron, earning his Combat Infantry Badge and a Bronze Star. He later served at FORSCOM with the Provost Marshal’s office as an investigator, physical security officer, terrorism analyst and General’s aide. He retired from the Army as a Major in 1986 with 20 years of service. Robert also policed in the Atlanta metro area and retired as a Patrol Sergeant from the DeKalb County Police Department with 22 years of service. While enjoying his retirement, he regularly golfed, performed feats of magic and penned a book, The Ghost of White Woman Creek. He is survived by Sandra Peterson, his wife of 58 years, sister Linda Smades of Leoti, KS, sister Barbara Kerschen of Denver, CO, his three sons, Eric, Rhett and Warren, and grandchildren Kayla, Hayden, and Sarah. A gathering of family and friends will be held on April 5th from 5pm to 8pm at Tom Wages Funeral Home 120 Scenic Hwy Lawrenceville, Ga. 30046. Due to the current COVID-19 regulations, our staff is committed to taking care of our guests and families that we serve. We ask that all guests and family members attending services to please bring and wear a mask. Condolences may be sent to or viewed at www.wagesfuneralhome.com. Tom M. Wages Funeral Service LLC, “A Family Company”, 120 Scenic Hwy Lawrenceville, GA, 770-963-2411, has been entrusted with the arrangements.

The family of Robert D. Peterson created this Life Tributes page to make it easy to share your memories.

[Please click here to view the livestream of Robert&#39;s service]...

Send flowers to the Peterson family.