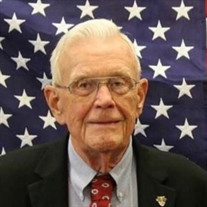 After a rich life of service and friendship, Robert Lee Norton, Jr. passed to heaven to join the love of his life Mary Kelley Norton early Thanksgiving morning, 2020. As he approached his last days his mind was sharp, but his 96 year old body was ready for the last journey. Born June 7, 1924 to Robert Lee Norton and Ruth Starnes Norton in Centerville, GA, he grew up on the farm with his brother Richard learning to be self-sufficient, loving the outdoors and with an unwavering moral compass. These traits served him well when on his second B-24 mission in WWII he was shot down over Linz, Austria. Captured, he never lost faith and was liberated seven months later in February 1945. Robert returned to Lawrenceville to marry his sweetheart and spend his career running the Western Auto store on the square. Robert was always there for his customers, whether it was delivering a freezer at midnight to replace a broken unit or reopening the store on Christmas Eve for a last minute gift. He was the person you could call to fix almost any problem. Robert never sought the spotlight but was an inspiration and pillar of the community. Active in Lawrenceville First Baptist Church, he was a Mason since 1946, a member of the Lion’s Club, and served as a member of the Gwinnett Hospital Authority, the City Council of Lawrenceville and a local bank board. Robert was an active Central Gwinnett HS Booster and loved nothing more than helping cook celebratory meals for the football team. Robert treasured people, whether it was traveling to Gatlinburg or Daytona with local friends, fishing with his father or buddies, or just being the quiet inspiration to those that looked up to him. Robert often said, “My family is my life”. He is predeceased by his wife Mary, his first daughter Claudia, who died before reaching the age of two, and his brother Richard Norton. He is survived by his daughters Nancy Norton (John Sammon) and Janet Norton (John Todd), Janet’s children Mary Charlotte (Lottie) Todd and John Robert Todd (Carey Todd), his new great grandson Jack, his sister-in-law Glyndia Bankston Norton, and many nieces, nephews, and cousins. The family is forever in debt to the relatives, friends, neighbors, and healthcare providers that assisted during his waning days. A small, private burial service will be held for immediate family. A celebration of life will be scheduled when it is safe. Anyone who wishes to make a contribution in his name can do so by contacting Lawrenceville First Baptist Church (165 S Clayton St, Lawrenceville, GA 30046).

After a rich life of service and friendship, Robert Lee Norton, Jr. passed to heaven to join the love of his life Mary Kelley Norton early Thanksgiving morning, 2020. As he approached his last days his mind was sharp, but his 96 year old body... View Obituary & Service Information

The family of Robert Lee Norton Jr created this Life Tributes page to make it easy to share your memories.

After a rich life of service and friendship, Robert Lee Norton,...

Send flowers to the Norton family.