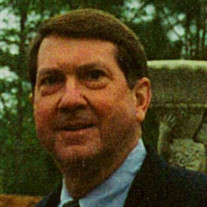 Robert Samuel Clements, Jr., age 82 of Cumming, GA, passed away Sunday, August 8, 2021. He was born September 10, 1938 in Columbus, only son of the late Robert Samuel Clements, Sr., and Mary Honea Clements. Robert (Bob) attended Georgia Military Academy and Georgia Tech. While at Georgia Tech, he was drafted into the US Air Force, where he met his future beloved wife, Sharon. Bob worked for several large corporations during his business career; including Link Belt, Brown and Root, Halliburton, and Team Industrial Services. He was a member and patron of Billy Graham association and attended a local Baptist Church. Bob was a long-standing member and property owner of Country Club of the South. Bob was an avid golfer and a successful stock investor and advisor. Bob and Sharon enjoyed traveling within the US as well as abroad during their life together. He was preceded in death by his son-in-law, William S. Pope; and beloved grandson, Bryce S. Pope. Bob is survived by his wife of 59 years, Sharon Elizabeth Clements; children, Jane Webb and Debbie Guinn; grandchildren, Madison Collins and Sloane Guinn; sister-in-law and brother-in-law, Andrea and Ken Klucsarits. Sharon claimed, “Bob had a mind like a steel trap”. The family wishes to thank Kimberly Bien, our caregiver, the nurses and staff of Sunrise at Five Forks Assisted Living, and nurses and staff of Capstone Hospice for their support and loving care. A graveside service will be held on Thursday, August 12, 2021 at 11:00 AM at Westview Cemetery, Atlanta, GA. In lieu of flowers, please consider a donation to Billy Graham Evangelistic Association, https://billygraham.org/give/give-online/ or Alzheimer’s Association www.alz.org, in memory of Robert Samuel Clements, Jr. Condolences may be sent or viewed at www.wagesfuneralhome.com. Tom M. Wages Funeral Service, A Family Company, 3705 Highway 78 West, Snellville, GA 30039 (770-979-3200) has been entrusted with the arrangements.

The family of Robert Samuel Clements, Jr. created this Life Tributes page to make it easy to share your memories.