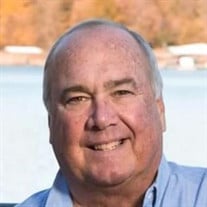 Richard Hoskins, 71, passed away peacefully with his wife of 41 years and his two daughters, by his side. He leaves behind a profound legacy that lives on in his family & many friends. Hoskins, a restauranteur, was born February 8, 1949 in Miami, Florida, the middle child of Dick & Jeanne Hoskins. He proudly graduated from The Ohio State University in 1971. After college, and following in his father's footsteps, he began a career in sales with Penske racing which allowed him to travel the country and follow his passion for formula one racing. After 2 years with Penske, he changed career paths and began working as a manager for Steak & Ale. He continued traveling which led him to Roanoke, VA, where he met and married his wife, the former Debra Webb. After several years and relocations in the corporate world, he and Debbie settled with their 2 daughters in Stone Mountain, GA in 1983. There he opened his own restaurant, Joe's To Goes. His restaurant was a huge success spanning 34 years. His employees described him as a mentor, father, friend, and even a father of immigrants. He was preceded in death by his father, Richard (Dick) Hoskins. He is survived by his mother, Jeanne Hoskins of Akron, OH; wife, Debbie Hoskins; two daughters and their spouses, Lindsay (DJ) Hawkins of Satellite Beach, FL, Bradey (Adam) Lee of Loganville, GA; four grandchildren, Abbie, Harper, Sadie, & Richard; brother, Dennis Hoskins of Canton, OH; sister, Jan (Joe) Wagner of Minneapolis, MN; in-laws, John & Nancy Webb; and nieces and nephews. A private memorial service will be held at 11:00am on Wednesday, January 13, 2021. Condolences may be sent or viewed at www.wagesfuneralhome.com. Tom M. Wages Funeral Service, a family company, 3705 Highway 78 West, Snellville, GA 30039 (770-979-3200) has been entrusted with the arrangements.

Richard Hoskins, 71, passed away peacefully with his wife of 41 years and his two daughters, by his side. He leaves behind a profound legacy that lives on in his family & many friends. Hoskins, a restauranteur, was born February 8, 1949 in... View Obituary & Service Information

The family of Richard Hoskins created this Life Tributes page to make it easy to share your memories.

Richard Hoskins, 71, passed away peacefully with his wife of...

Send flowers to the Hoskins family.