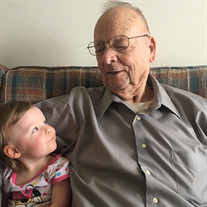 Raymond Edwin Radke, age 87, passed away on Friday, November 22, 2019, in Snellville, GA. Ray is survived by his daughter, Marilyn Elaine Greene and husband Jere, of Lilburn, GA; his granddaughter, Holly Kooi and husband Will, of Vienna, Austria; his grandson, Hunter Greene and wife Hannah, of Columbus, OH; along with four great-grandchildren, Elliott and Lucy Kooi, and Meredith and Samuel Greene. He is preceded in death by his wife of 47 years, Jerry Gail (Bolton) Radke, of Snellville, GA. Ray was born on September 8, 1932 in Tupelo, MS, to parents Carl Robert and Willie (Carpenter) Radke. He graduated from Mississippi State University in 1954, with a degree in Industrial Management. After serving in the Air Force, he worked at the Stratford Furniture Company of New Albany, MS. In 1960, he moved to Memphis, TN to accept a position as an Energy Engineer at Memphis Light, Gas & Water, where he retired after 25 years. In 2002, he and his wife moved to Snellville, GA, to be near their daughter's family. Burial will take place in Tupelo Memorial Park Cemetery, Tupelo, MS. A private memorial service for the family will be scheduled at a later date. Condolences may be sent or viewed at www.wagesfuneralhome.com. Tom M. Wages Funeral Service, LLC, A Family Company, 3705 Highway 78 West, Snellville, GA 30039 (770-979-3200) has been entrusted with the arrangements.

The family of Raymond "Ray" Radke created this Life Tributes page to make it easy to share your memories.

Send flowers to the Radke family.