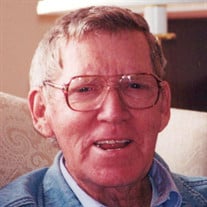 Raleigh (R.L.) Porter April 3, 1928 – June 12, 2021 Raleigh’s parents, Montrilla and Russell Porter, raised their family in Gwinnett County as tenant farmers. R.L. was from a family of thirteen children. He was born fourth from the oldest, with seven sisters and five brothers. Raleigh was educated in various Gwinnett County schools as a result of his farm to farm childhood. R.L. served in the Army during the Korean War and was honorably discharged as a Corporal. He returned to Lawrenceville and married his hometown sweetheart Louise Waldrip on June 16, 1954. A year later their daughter Karen arrived followed three years later by their son Glenn. Raleigh was self-employed as a house painter and landscaper. He loved traveling our great country and enjoyed collecting Depression glass. He was proud to call Georgia his home and truly enjoyed the small town southern life. Raleigh and Louise were overjoyed when they became grandparents in 1984 and over the moon at becoming great grandparents in 2014. During retirement, he enjoyed the life of a country antique dealer, going from small towns to old barns for his much sought after treasures. Raleigh’s last two years were difficult as a result of a hip break and congestive heart failure. Raleigh is survived by his wife, Louise; daughter, Karen and son-in-law, Frank Boykin; son, Glenn and daughter-in-law, Kim; grandchildren, Lauren, Stephen, Dillon and Allison; great grandchildren, Anna Grace, George and Henry; sister, Shirley Roebuck; brother-in-law, Luther Waldrip; as well as many nieces and nephews. A funeral service honoring the life of Raleigh will be held on Wednesday, June 16, 2021 at 1:00pm at Tom M. Wages Lawrenceville Chapel. Interment will follow at Chestnut Grove Baptist Church Cemetery. The family will receive friends on Tuesday, June 15th from 6:00pm-8:00pm. A reception following the graveside service will be held at First Baptist Church Grayson Fellowship Hall. The family would like to offer a special thank you to Longleaf Hospice and to Kim and Dillon for their extraordinary care of Raleigh. Condolences may be sent to or viewed at www.wagesfuneralhome.com. Tom M. Wages Funeral Service LLC, “A Family Company”, 120 Scenic Hwy Lawrenceville, GA, 770-963-2411, has been entrusted with the arrangements

The family of Raleigh R.L. Porter created this Life Tributes page to make it easy to share your memories.

Send flowers to the Porter family.