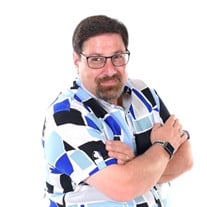 Rabbi Scott Sekulow, the “Flipping Rabbi,” lifelong resident of Georgia, died in Snellville, Georgia on August 12th, 2021. Scott is survived by his loving wife, Judy; daughter, Natalie; mother-in-law, Janelle Burnham; brothers, Jay and Gary; and sister, Jeannie Posner. He was predeceased by his mother and father, Natalie and Stanley. Scott was born in Chicago, Illinois on July 10, 1966 before his family moved to Atlanta, where he would spend much of his life. He graduated from Woodward Academy before attending Mercer University, where he received a BA in Marketing in 1987. Scott and Judy married in 1989, with their daughter Natalie being born in 2001. Scott graduated Summa Cum Laude with a BS in Biblical Education in 1994, at which time he started full-time ministry. Rabbi Scott and Rebbetzen Judy traveled the world with his ministry, touching the lives of thousands from Israel to the former Soviet Union and numerous countries in Latin America. In October 2001, Rabbi Scott founded Congregation Beth Yeshua, which was the first Messianic Congregation in Macon, Georgia and in August 2002, he and his wife founded Congregation Beth Adonai in Atlanta, Georgia, where he ministered until his passing. In 2007, Scott and Judy started a radio show called “The Messianic Hour,” where they focused on the theme of “reaching the lost and educating the found.” In 2001, he founded Israel’s Harvest Ministries (IHM) to reach out to the unsaved Jews and Gentiles all over the world. This mission is accomplished through evangelistic outreaches to the nations, as well as, helping the Church to fulfill Romans 11 by teaching them about their Jewish roots and heritage. In April 2002, World magazine chose Scott as the notable Jewish believer in 2001 for his work in Israel. Scott loved watching his daughter compete in equestrian events, traveling across the country with her as she competed in national tournaments. He loved traveling, often cruising with his wife and daughter and going to DisneyLand. He enjoyed going to recently released Star Wars and Star Trek movies with his brother Gary and nephew Logan. He and Judy had 4 dogs that they loved and cared for, and had a deep love for fish that started with a goldfish named “Killer” during his childhood that expanded into a koi pond later in life. Rabbi Scott was known for his love of people, from his congregation to house flipping business, a Homevestors franchise he founded in 2018, where he worked with his sister Jeannie and close friend George, as well as mentored numerous franchisees. Rabbi Scott will be remembered for the thousands of lives he touched through his position in ministry and his loving personality, and the wife and daughter he leaves behind. The services to celebrate the life of Rabbi Scott Sekulow will be private services for the family only. Due to COVID-19 regulations, our staff is committed to taking care of our guests and families that we serve. We also ask all guests and family members attending visitations and services to please continue social distancing and if desired to bring and wear a mask. Condolences may be sent or viewed at www.wagesfuneralhome.com. Tom M. Wages Funeral Service, 3705 Highway 78 West, Snellville, GA 30039 (770-979-3200) has been entrusted with the arrangements.

The family of Rabbi Scott L. Sekulow created this Life Tributes page to make it easy to share your memories.

Send flowers to the Sekulow family.