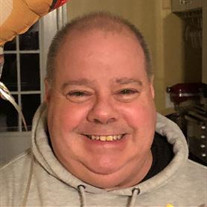 Preston Scott Miller October 23,1963 – June 4,2021 - Atlanta, GA Mr. Preston Scott Miller, 57, passed away after a brief illness, surrounded by loved ones, on June 4, 2021. He left his earthly life to join his departed mother and celebrate her heavenly birthday with her. Born October 23, 1963 in Winston-Salem, NC, he was the son of Dr. Henry S. Miller, Jr and the late Martha “Scottie” Miller. He attended Summit School where he participated in theatrical productions and graduated from Forsyth Country Day School where he enjoyed playing on the soccer team. He was always interested in marketing and business strategies. Upon learning that man had landed on the moon, he set out in the neighborhood to sell his own collection of “moon “ rocks. His business flourished. He graduated from the University of Georgia with a degree in Economics and a minor in International Business. He was able to spend one of his summers living and working with a host family in Japan. He also enjoyed being a junior counselor at Sea Island , GA where his family enjoyed vacationing for many years. He started his career working for the US Department of Commerce in Washington, DC. Later he worked for a law firm, where he specialized in import and export marketing. Scott decided to further his education by getting an MBA in Marketing from Wake Forest University. Upon graduation, he did special project work for Hanes Corporation in Australia. When he returned to the United States, he started working with UPS in their international division which included Japan and the far East. One of his assignments was during the 1998 Winter Olympics in Nagano, Japan. During his business career he worked for several companies, but Dell Technologies was his last employer at the time of his death. Scott loved life and enjoyed spending time with family and friends. He has been happily married to Jacobo Jacobo Cisneros since September 5, 2013. They enjoyed international traveling, spending time in their yard, as well as cooking delicious meals and treats. Scott loved to share his culinary skills with neighbors, family, and friends. Scott is survived by his spouse, Jacobo; his father, Henry S. Miller, Jr; his brother, Henry S. Miller, III ((Kim); his sister, Marie M. Mallard (Chip); his uncle, Preston S. Miller; his aunt, Alice M. Livingston; two nephews, H. Shelton Miller, IV (Esthela), S. Garrett Miller (Tara); two nieces, Kimberly M. Decell (Grady); Brittany M. Mize (Jon); 4 great nephews and 2 great nieces. He is also survived by many other family and friends who knew and loved him. A small family service to celebrate his life will be held Friday June 11th at 2 o’clock at Tom M. Wages Lawrenceville Chapel 120 Scenic Hwy Lawrenceville, GA. Interment of the ashes will be on Saturday June 12th at 3 o’clock at Centenary United Methodist Church Columbarium -646 West Fifth Street Winston-Salem, NC. The family would like to extend a special thanks to the staff of Piedmont Atlanta Hospital for their compassionate care. In lieu of flowers, memorial contributions may be made to the Alzheimers’s Association or a charity of your choice. Condolences may be sent to or viewed at www.wagesfuneralhome.com. Tom M. Wages Funeral Service LLC, “A Family Company”, 120 Scenic Hwy Lawrenceville, GA, 770-963-2411, has been entrusted with the arrangements.

The family of Preston Scott Miller created this Life Tributes page to make it easy to share your memories.

Send flowers to the Miller family.