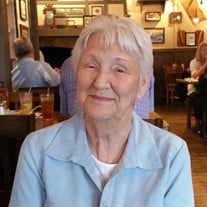 Peggy Irwin Bowman, age 84 of Snellville, GA, passed away February, 19, 2022 of Covid complications. Peggy had been battling Multiple Myeloma for the past 4 years but had spent time in the hospital due to Covid complications. Peggy was a graduate of Catholic Central High School in Chillicothe, Ohio, but had been in the south for the last 45 years with her family. Peggy raised two children and spent years involved in Intramural Little League sports with her children and husband while serving on many PTA Committees and in Booster Clubs at South Gwinnett and Shiloh High Schools. She worked at Shiloh Middle School as the Media/Library Clerk from 1985 until retirement. Peggy attended St. John Neumann Catholic Church and she was an avid reader. She believed in the strength of reading and found books to be magical for how they could transport anyone to anywhere. Peggy’s greatest hobby was her family and she was deeply dedicated to her grandchildren. Peggy is preceded in death by her son, MM2 Christohper Scott Bowman (United States Navy), and her husband of 50 years, Donald Eugene Bowman. Peggy is survived by her daughter, Nicole L. Monturo and grandchildren, Christopher Michael Monturo & Reagan Marie Monturo. Other survivors are Peggy’s Sister-in-law, Joy Guerber of Eden Prairie, MN; her sister and brother-in-law, Rosie & Dave Daughters of Chillicothe, Ohio; her brother & sister-in-law, James & Mary Irwin of Chillicothe, Ohio; and her brother & sister-in-law, Robert & Shirley Irwin of Kingston, Ohio; along with nieces/nephews and great nieces/great nephews. The family will receive friends at Tom M. Wages Snellville Chapel on Saturday February 26, 2022 from 4:00 PM until 6:00 PM. There will be a Catholic Funeral Mass at St. John Neumann in Lilburn, GA, on Tuesday March 1, 2022 at 11:00 AM with a reception immediately following the Mass. In lieu of flowers, please make donations to the Home of Hope at Gwinnett Children’s Shelter, 3850 Tuggle Road, Buford, GA 30519 OR St. Jude’s to honor Cancer research. Condolences may be sent or viewed at www.wagesfuneralhome.com. Tom M. Wages Funeral Service, A Family Company, 3705 Highway 78 West, Snellville, GA 30039 (770-979-3200) has been entrusted with the arrangements.

The family of Peggy Bowman created this Life Tributes page to make it easy to share your memories.

Send flowers to the Bowman family.