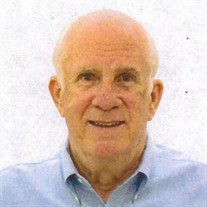 Paul Harvey Williams Sr., age 75 of Lilburn, Georgia, passed away on Wednesday, December 2, 2020. He was preceded in death by his son, Paul Harvey Williams Jr.; mother, Ariel Rose Filsinger Williams; father, Arthur Julius Williams Sr.; and brother, Arthur Julius Williams Jr. He is survived by his loving wife, Elly Schriebl Williams; daughter, Teresa Williams Lipscomb; son-in-law, Geoffrey S. Lipscomb M.D.; and grandchildren, Ariel, Grace, and Grant Lipscomb. Paul Williams was born in Oneida, New York, on November 6, 1945. He attended and graduated from Bolivar Central School. He enlisted in the Armed Forces and served in the Army. He was stationed in France and The Netherlands with NATO, during the Vietnam War. While serving in The Netherlands, he met his wife, Elly. After serving his country, he attended and graduated from Embry-Riddle Aeronautical University, in Daytona Beach, Florida. Soon after graduating, he began his career with Bellsouth Services, where he was employed for 30 years. In his later years, he was an active member of Mountain Park United Methodist Church, served on the board of the Gwinnett County Branch of Habitat for Humanity, volunteered with the Lilburn Cooperative Ministry as well as a volunteer for the Georgia Department of Veterans Service. There will not be a service. However, donations can be made to Gwinnett Habitat for Humanity and/or the Leukemia &Lymphoma Society, in his honor. Condolences may be sent or viewed at www.wagesfuneralhome.com. Tom M. Wages Funeral Service, a family company, 3705 Highway 78 West, Snellville, GA 30039 (770-979-3200) has been entrusted with the arrangements.

The family of Paul H. Williams, Sr. created this Life Tributes page to make it easy to share your memories.

Send flowers to the Williams, family.