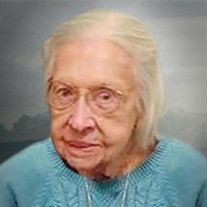 Mildred Bennett Kennedy, age 98, of Lawrenceville, Georgia, died on Monday, May 2, 2022 at home surrounded by her daughter & son-in-law. She was preceded in death by her husband of 51 years, Willie Clyde Kennedy, Sr., who died on Tuesday, September 17, 1996. She was born on March 13, 1924 in Grayson, Georgia to Clifford Owen Bennett and Loula Wages Bennett and had been a lifelong resident of Gwinnett County her entire life. She was a graduate of Lawrenceville High School and worked as an Office Clerk with the Regenstein’s Store in Atlanta, an upscale women’s clothier. Mrs. Kennedy had been a member of the former Glenwood Hills Baptist Church in DeKalb County for years. She enjoyed sewing, crocheting, macramé, knitting and working with string and yarn. She crochet baby blankets for everyone, especially her grandchildren’s babies. Teaching people to be able to sew was very enjoyable to Mrs. Kennedy. She was a great cook (always putting a little sugar in everything). She enjoyed cooking for her family but really enjoyed going out to eat so she didn’t have to wash dishes. She loved watching Channel 8’s cooking shows and would always say, “Why did they put that in that dish.” She would feed the dog’s unsalted peanuts and of course ate the peanuts too. She really enjoyed watching birds from the porch. She and Mr. Kennedy had a bird book they looked at to help them identify the different birds outside their home. Mrs. Kennedy was a devoted daughter, wife, mother, grandmother, sister and friend. Her family said she could be stubborn but her love for them was undeniable. She was a southern lady and is going to be missed by her adoring family and anyone that had the joy of knowing this woman. She is survived by daughter, Frances Kennedy Bridges (Larry) of Lawrenceville, GA; son, Willie Clyde Kennedy, Jr. (Pat) of Good Hope, GA; three grandsons, Kevin Lee Bridges, Ryan Ellis Bridges (Amber), Jeffrey Scott Kennedy (Niki); granddaughter, Kimberly Kennedy Suggs (Bryan); eight great grandchildren; Haley, Abbey, Ethan, Hannah, Kyle, Lucie, Kali and Jacob; numerous nieces, nephews, great nieces, great nephews, other relatives and a host of many friends. Mrs. Kennedy was also predeceased by her parents, brother, Guy Bennett and daughter, Sara Ann Kennedy. A Graveside Service to Honor and Celebrate the Life of Mildred Bennett Kennedy will be held on Thursday, May 5, 2022, at 1:00 P.M. at Chestnut Grove Baptist Church Cemetery, 2299 Rosebud Rd. SW, Grayson, GA 30017 with Minister Harold Savage officiating. The family will receive friends on Thursday, May 5th from 11:00 A.M. to 12:30 P.M. at the funeral home before the graveside service. Condolences may be sent or viewed at www.wagesfuneralhome.com. Tom M. Wages Funeral Service, 120 Scenic Highway, Lawrenceville, GA 30046 (770-963-2411) has been entrusted with the arrangements.

Mildred Bennett Kennedy, age 98, of Lawrenceville, Georgia, died on Monday, May 2, 2022 at home surrounded by her daughter & son-in-law. She was preceded in death by her husband of 51 years, Willie Clyde Kennedy, Sr., who died on Tuesday, September... View Obituary & Service Information

The family of Mildred Bennett Kennedy created this Life Tributes page to make it easy to share your memories.

Send flowers to the Kennedy family.