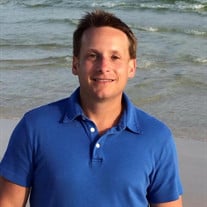 It is with our deepest sorrow to announce that our Son, Brother, Uncle, Nephew, Cousin and Friend, Michael Lofton Warren aka “Mikey,” age 45 of Snellville, GA, passed away peacefully on Monday, September, 13, 2021, surrounded by his loved ones. Michael fought a long and hard battle of brain tumors since the age of six years old. We were all truly blessed to have him in our lives for 45 amazing years. He was a true fighter and fought hard, but it was just his time to go to his forever home. Michael was born on October 17, 1975 in Jackson, Mississippi and was a force to be reckoned with from the get go. He graduated from Brookwood High School in 1994 and Georgia Southern University in 1999. He pursued and was awarded a Bachelor degree in Sports Medicine. After leaving Georgia Southern University, he had an internship at the Naval Academy for one year. He then went to Eastern Kentucky University and received his Master’s degree. Upon completion of his Master’s degree, he stayed on the athletic staff for five years as an athletic trainer. He then became an SEC athletic trainer at Ole Miss University for five years. After leaving Ole Miss, he went to work at Select Medical as their athletic trainer and worked there until his diagnosis. After graduating from Georgia Southern, Michael’s college friends would travel to Statesboro, GA to attend every home game played at Georgia Southern. They would drive down Saturday morning, tailgate and go to the game rooting on the Eagles. This is something that Michael looked forward to every Saturday during football season. It was his favorite time of the year. It seemed like the group got bigger and bigger every year meeting new people that shared their passion for the Georgia Southern Eagles. Michael’s family knew if they were planning a family event that they had to check with Michael’s Georgia Southern football schedule first. It was kind of a running joke in the Warren household. Family, Friends and Sports is what made Michael happy. It put a smile on his face each and every day. Although Michael was unable to enjoy life to the fullest over the past year and eight months, he gave us all such courage and hope and reminded us every day of the preciousness of life. Michael lived a very full and vibrant life with more friends than you could count. They meant the world to him. His friends describe him as the most loyal, kind hearted, and most generous person that they knew. Michael never met a stranger and always had a smile on his face. Michael will be truly be missed by all. Michael was preceded in death by his Grandmother and Grandfather, Virginia and Frederick Neil of Jackson, Mississippi; his Grandmother, Genell Person of Laurel, Mississippi. He is survived by his loving parents, Mike and Kathy Warren of Snellville, GA; his Brother, Neil Warren of Atlanta, GA; his Sister, Michelle Ramu (Ray), Nieces and Nephews (Sophia, Jack, Ella and Caden) of Cumming, GA; his Sister, Paige Ward (Richey), Niece and Nephew (Alex and Lydia) of Hattiesburg, MS; Sister, Amy Dickerson (Robert), Niece and Nephew (Andrew and Lauren) of Chattanooga, TN; his Uncles, Richard Warren (Mildred) of Laurel, Mississippi; Charles Neil (Becky) of Orange Beach, AL; his Aunts, June Skipper (Jerry), Nancy Pitts (Toby); his Aunt and Godmother, Barbara Neil of Jackson, Mississippi; he is also survived by many wonderful cousins, Barrie Welty (John), Matt Neil (Jessica), Jennifer Skipper, Saylor Davis, Brandi Davis (Budder), Marsha Warren, Rhonda Reeves (Graham), Eddie Warren (Margie) and their children; Michael is also survived by MANY amazing life-long friends that he loved with all of his heart. In lieu of flowers, the family asks that you consider making a donation to the Georgia Southern University athletic department, through his GoFundMe Memorial Fund. Michael loved his Georgia Southern Eagles. He was very proud of all of the players and coaches that he worked with along the way. He trained hundreds of players during his career and made the absolute best friends that he STILL has to this day. Every day is a new opportunity to choose joy, despite sorrow. To that end, we have planned a celebration of life service to share all the joy of Michael’s life. We have much to be thankful for and plan to be together to celebrate his wonderful life and to give thanks for him for being a part of all of our lives. We want to thank God for lending him to us for 45 amazing years. The Polo Fields Golf & Country Club 6300 Polo Club Drive Cumming GA, 30040 Sunday, September 26, 2021 2:00pm Condolences may be sent or viewed at www.wagesfuneralhome.com. Tom M. Wages Funeral Service, 3705 Highway 78 West, Snellville, GA 30039 (770-979-3200) has been entrusted with the arrangements.

It is with our deepest sorrow to announce that our Son, Brother, Uncle, Nephew, Cousin and Friend, Michael Lofton Warren aka &#8220;Mikey,&#8221; age 45 of Snellville, GA, passed away peacefully on Monday, September, 13, 2021, surrounded by... View Obituary & Service Information

The family of Michael L. Warren created this Life Tributes page to make it easy to share your memories.

It is with our deepest sorrow to announce that our Son, Brother,...

Send flowers to the Warren family.