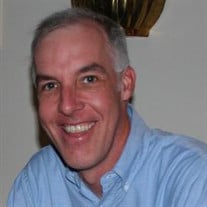 Michael Conrad Lavallee unexpectedly passed away peacefully in his sleep, on March 26, 2021. Mike was born February 29, 1964 in Attleboro, MA and grew up in a loving household in Pawtucket, RI. He was a 1982 graduate of St. Raphael Academy, and went on to receive an engineering degree from Wentworth Institute of Technology in Boston, as well as an MBA degree from Providence College. Having a leap day birthday was something Mike enjoyed. In those non-Feb 29th years, he always insisted on celebrating February 28th & March 1st, of which no one seemed to mind indulging him. Well known for his electric smile, Mike could light up a room with his magnetic personality, never meeting a stranger. No matter the setting, if you met and got to know Mike, you were a friend. If you needed anything, Mike wouldn’t hesitate to stop what he was doing and lend a hand. He was very handy, particularly with anything automotive. Often after completing a challenging task, he would enter the house with his hands raised in the air proclaiming he was the world’s greatest mechanic. His generosity with his time and talent were honored acts of kindness by all his friends, family, and neighbors. Mike worked in a variety of engineering settings. He moved to Atlanta, GA in 1992 to work in the environmental engineering field. From there, Mike worked a wind farm construction project in Wyoming and various natural gas pipeline projects across the country. Admired by his colleagues for his confidence and tenacity to get things done, Mike was always one of their top go-to guys. Mike met his wife, Cathy, on Blind Date Night 2000, an annual event hosted by the Catholic Archdiocese of Atlanta Young Adult Ministry. Their first date was attending Mass together followed by dinner and dancing. They married April 20, 2002, a day Mike often described as the best day of his life. He was a devoted husband, and Cathy’s biggest cheerleader in all her academic endeavors, especially Cathy’s Doctor of Physical Therapy degree. They had recently moved to The Villages, FL in 2018. Mike is survived by his wife, Catherine Lavallee, of The Villages, FL.; a brother in-law, Chuck Weiss, of Duluth, GA; several aunts, uncles, and cousins; and friends as numerous as the stars. He was preceded in death by his parents, Pauline and Conrad Lavallee. The visitation will be April 23, 2021 from 6:00-8:00 p.m. at Tom M. Wages Funeral Home, in Snellville, GA. A funeral Mass will be held at St. Oliver Plunkett Catholic Church Saturday, April 24, 2021 at 11:00 a.m. The funeral Mass will be Livestreamed (YouTube search St. Oliver Plunkett Snellville) for those unable to attend and due to limited seating capacity. In lieu of flowers, donations in Michael’s memory can be made to: Furkids Animal Rescue & Shelters, https://furkids.org/donation/ Condolences may be sent or viewed at www.wagesfuneralhome.com. Tom M. Wages Funeral Service, A Family Company, 3705 Highway 78 West, Snellville, GA 30039 (770-979-3200) has been entrusted with the arrangements.

Michael Conrad Lavallee unexpectedly passed away peacefully in his sleep, on March 26, 2021. Mike was born February 29, 1964 in Attleboro, MA and grew up in a loving household in Pawtucket, RI. He was a 1982 graduate of St. Raphael Academy,... View Obituary & Service Information

The family of Michael Conrad Lavallee created this Life Tributes page to make it easy to share your memories.

Send flowers to the Lavallee family.