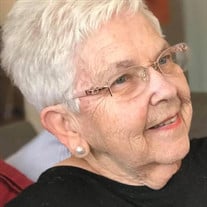 Maureen Over Cliche, age 85, of Grayson, GA passed away peacefully on Saturday, September 18, 2021. She is survived by her children, Debbie Cliche of Chattanooga, TN; Kevin (Cindy) Cliche of Murfreesboro, TN; Colleen (Jeff) Simonis of Snellville, GA; Tom (Richelle) Cliche of Los Alamitos, CA; Russell (Jessica) Cliche of Hixon, TN; David (Luana) Cliche of Brooks, GA; grandchildren Hayden, Kennon, Kyle, Colin, Samarie, Isabella, Malorie, Parker, Kali, Lilia, her sisters-in-laws Joan, June, Barbara, several nieces/nephews and longtime friends especially Elsie Tomazic. Maureen was born in Torrington, CT on January 22, 1936 to Edward and May Over. She met the love of her life at a Yale’s football game. He was a young man from Whitefield, NH. They married June 22, 1957. After marrying the love of her life, Don Cliche in 1957, she raised 6 children and continued to support her family in various extracurricular activities. She held leadership roles at Church and school. Mom always said her purpose in life was to take care of Dad and her children and to help them get to heaven. Music has always been a major part of her life, starting at an early age in school and Church. She competed in numerous vocal competitions. Her love for music didn’t stop there. She started and directed in 1967 a singing group of mothers from Holmes School in New Britain, CT who were called Do Re Mommies. She was also Choir Director at various Catholic Churches throughout her life. When she moved back to GA, she joined with our Dad in a senior music group Hi-Lo’s. Faith, Family, and Friends meant everything to her. The Cliche home was known as a place to gather for all to celebrate life, holidays and friendships. Thank you Gerri Goss, Caregiver, for loving our Mom the way you did. Maureen was preceded in death by her husband, Donald Cliche, her parents and brother, Raymond Over. Visitation/Vigil for Deceased will be held Wednesday, September 22, 6:00-7:00 pm in JP Center (house next to the church) and Rosary 7:00-7:30 at St. Oliver’s Catholic Church. A Memorial Mass will be held on Thursday, September 23, 2021, at 11:00 am, at St. Oliver Plunkett Catholic Church, 3200 Brooks Drive, Snellville, GA 30078. A PRIVATE inurnment will be held at a later date at Georgia National Cemetary. The mass for Maureen will be livestreamed. To view please go to stoliverplunkettsnellville. In lieu of flowers the family will announce a charity at a later date. Condolences may be sent or viewed at www.wages funeral home.com. Tom M. Wages Funeral Service, 120 Scenic Hwy., Lawrenceville, GA 30046 (770-963-2411) has been entrusted with the arrangements.

The family of Maureen Over Cliche created this Life Tributes page to make it easy to share your memories.

Maureen Over Cliche, age 85, of Grayson, GA passed away peacefully...

Send flowers to the Cliche family.