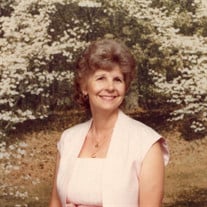 Maryland Virginia (Biggs) Henning, 93, died on Thursday, November 25, 2021 in the caring and loving community of Woodland Ridge Assisted Living in Smyrna, Georgia. She was born in the family home in Shreveport, LA to Harvey and Virginia (Eyler) Biggs. Her parents were missing their homes in Maryland and West Virginia, so they named their only child Maryland Virginia. During her childhood, her father was a district manager for Kelly Springfield Tire Company. She moved many times but mainly spent her childhood in various locations of Texas. She adored her father. He taught her to shoot a pistol and fish. Her family moved to Atlanta where she graduated from Girls High in 1945. She was a class officer – Bank Director. Maryland attended the University of Georgia, Atlanta Division majoring in Science. She worked for Southern Bell Telephone and Telegraph Company in the payroll department. Maryland was very musical. She had her first music lesson when she was 5 years old. She played the marimba and timpani drums. She was a member of the Atlanta Symphony Orchestra. During World War II, she performed for the troops in USO shows at hospitals and other venues. She served more than 3000 hours in this role. They put on two shows every Monday night at Fort McPherson in Atlanta. She was usually the second act and was billed as “Musical Moments with Maryland and her Marimba”. She always started her act with “The World is Waiting For the Sunrise” followed by whatever was popular at the moment. She married the love of her life, Albert Clifford Henning, on March 19, 1949. Their first date was a blind date at the Varsity on December 29, 1947. She told her Mama not to worry that he wasn’t it. They shared many adventures together. Frequently, they went tent camping. She held many jobs over the years. She taught music for Kindergarten classes and was a substitute teacher. In later years, she performed accounting functions for Capitol Pet (Cappet) Industries. But if you would have asked her what her primary role was, she would have said Mother, Grandmother and Homemaker. She always wanted a house in the mountains. With money she saved from her early jobs, she purchased property in Hiawassee, GA with her parents. Maryland, Al, and her father Harvey designed and built a house which they called “Dun-Hun-Tin”. After her husband Al retired, they traveled all over the United States visiting national parks in a converted van. They drove to Alaska three times and would have moved there except for missing their two daughters and four grandchildren. They visited every one of the fifty states. Maryland had many hobbies: Painting (Water colors and Oil); Genealogy; Square Dancing; Gardening; Sewing; Hat Making; Camping; Rock Hunting; Jewelry Making; Basket Weaving; Flower Arranging; Quilting; and Playing the Piano and Organ. Maryland and Al had a craft business called the “Hen House” since their last name was Henning. They sold Appalachian baskets, Christmas ornaments and other craft items at craft shows. A key strength was her faith. She was a long-time Methodist and a member of Snellville United Methodist Church. She was a lay pastor there. Maryland was an active member of the Fellowship Sunday School class. She also taught Marriage Enrichment classes. Further, she volunteered at the Christian Broadcasting Network as a counselor. Another key strength was her patriotism. She was a Life Member of the National Society of the Daughters of the American Revolution, Philadelphia Winn Chapter. She was a member of the Order of First Families of Maryland. One of her many gifts to her children were volumes of family history books and a three inch family history describing The Biggs Family of Maryland and West Virginia. She taught genealogy classes at Bethesda Senior Center. Maryland was a Child Advocate for Gwinnett County Courts. Maryland was preceded in death by her husband, Albert Clifford Henning; and her parents, Harvey and Virginia Biggs. Maryland is survived by her two married daughters, Maryland (Don) McCarty of Snellville, GA and Andrea (Ed) Brannen of Lilburn, GA. She dearly loved her grandchildren: David McCarty, Brent Brannen, Nathan Brannen and Lydia Brannen. A memorial service to Honor and Celebrate the Life of Maryland Virginia Henning will be held on Monday, December 20, 2021 at 1:00 PM at Snellville United Methodist Church 2428 Main Street East, Snellville, Georgia 30078. The family will receive friends from 12:00 PM until 1:00 PM on Monday, December 20, 2021 at Snellville United Methodist Church. In lieu of flowers, memorials may be made, in Maryland Henning’s name, to Snellville United Methodist Church, 2428 Main Street East, Snellville, GA 30078. You can also give to the "National Society Daughters of the American Revolution", Office of Development, 1776 D Street NW, Washington, DC 20006-5303 in her memory. A special thank you to the staff of Woodland Ridge Assisted Living in Smyrna, GA and Tapestry Hospice of Calhoun, GA for their attentive and loving care. Condolences may be sent or viewed at www.wagesfuneralhome.com. Tom M. Wages Funeral Service, A Family Company, 3705 Highway 78 West, Snellville, GA 30039 (770-979-3200) has been entrusted with the arrangements.

Maryland Virginia (Biggs) Henning, 93, died on Thursday, November 25, 2021 in the caring and loving community of Woodland Ridge Assisted Living in Smyrna, Georgia. She was born in the family home in Shreveport, LA to Harvey and Virginia (Eyler)... View Obituary & Service Information

The family of Maryland Virginia Henning created this Life Tributes page to make it easy to share your memories.

Send flowers to the Henning family.