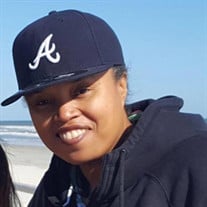 The family appreciates your prayers during this time. Mary “Redd” Elizabeth Smith, 51, entered the gates of heaven on Wednesday, April 27,2022 at Northside Hospital in Duluth, Georgia. Redd is survived by her wife, Kimberly Ann Smith; her son, Christopher Michael Antonio Smith; her stepchildren, Jasmine Hutt, Isaiah Sallee, Michael Sallee, Marcus John Sallee, and CJ Sallee; her nieces, Chelsey Smith and Nia Jones-Smith; great nephews, Aidan Clark and Patrick III aka Three; her great niece, Asa Rose Smith; her sisters, Necola Robinson and Kenyatta Harris; her mother; her God mother, Muffy; her brothers, John, Michael, Branden and Marquis Smith; as well as a host of family and friends. She is preceded in death by her grandmother, Woylene Coleman; her great aunt, Mary Strickland; her father, Robert Smith; her sister, Dawn Rebecca Smith. “Redd” was born on January 8th 1971 at Grady Memorial Hospital in Atlanta, Georgia. She graduated from Walter F George High School in 1989. Redd studied nursing at Spellman College for a short time before accepting a position at the United States Postal Service where she worked for almost 30 years. Redd was a wonderful woman who touch so many lives everywhere. Everywhere Redd went she made a friend or was able to easily strike up a conversation and had the most calming and loving spirit imaginable. Redd enjoyed many unique activities including but not limited to poker, bingo, traveling, listening to live music and even owning a professional football team. Redd was a wonderful provider as a single mother to Chris, and took on the care of her two nieces, Chelsey and Nia after the death of her younger sister, Dawn Smith. One Christmas day in 2014 she went to see The Hunger Games: Mockingjay part 1 at Movie Studio Grill in Duluth. A woman walked in with her daughter and sat in the seat next to her. After a few minutes Redd leaned over and asked the woman if she would like a drink, from then on, a family of love, bonding, cherished moments, and tons of laughter formed. Redd was the link to it all. She bonded everyone together and was the strength, the soul and heartbeat of our family. She will forever be missed and loved but never forgotten. The service to celebrate the life of Mary “Redd” Elizabeth Smith will be held on Saturday, May 7, 2022 at 1:00 PM at The Vision Cathedral of Atlanta, Atlanta, GA. Condolences may be sent or viewed at www.wagesfuneralhome.com. Tom M. Wages Funeral Service, A Family Company, 3705 Highway 78 West, Snellville, GA 30039 (770-979-3200) has been entrusted with the arrangements.

The family appreciates your prayers during this time. Mary &#8220;Redd&#8221; Elizabeth Smith, 51, entered the gates of heaven on Wednesday, April 27,2022 at Northside Hospital in Duluth, Georgia. Redd is survived by her wife, Kimberly Ann... View Obituary & Service Information

The family of Mary Elizabeth Smith created this Life Tributes page to make it easy to share your memories.