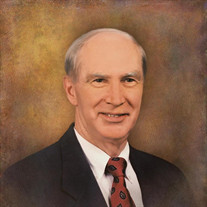 Marvin Burton passed away on June 30 after a brief illness. Marvin is survived by his three children and their spouses, Jimmy (and Debbie) Burton, Karen (and Dale) Garner, and Teresa (and Keane) Cruce; eight grandchildren, Stephanie (and Alex) Michaud, Reid (and Ashley) Garner, Rebecca (and Zach) Robbins, Brent Cruce, Bryan (and Katie) Cruce, Catherine (and Jon) Lester, Caroline (and Harry) Jozefczyk, and Ryan Burton; seven great-grandchildren, Amelia and Garrett Garner, Madison and Elizabeth (Elle) Michaud, Jackson Robbins, Wren Lester, and Owen Cruce; brother, Ralph Burton, sister, Ruth Hannon, and numerous nieces and nephews. He is preceded in death by his beloved wife of sixty-seven years, Penny Burton; siblings, Harold Burton, Nellie Moore, Parks Burton, Lois Sloan, Mary Tucker, and Bobby Burton. Marvin was born on October 22, 1930, to Guy and Johnnie Burton, and grew up on the family farm near Grayson. He graduated from the original Grayson High School in 1947 and from Abraham Baldwin Agricultural College in 1949. On March 10, 1951, Marvin married the love of his life, Penny Johnson. He was drafted in the Army later that year and served as a corporal while stationed in Germany during the Korean War. After his tour of duty, the couple moved to Decatur where they raised their family. Marvin’s strong work ethic was evident as he began his career while also taking night classes, eventually earning his MBA from Georgia State. In 1974, the family moved to Grayson, where they built a home on land that was part of the original Johnson homestead and enjoyed living near many members of both the Johnson and Burton families. Marvin had a long and successful career at Georgia Power Company, beginning as a meter reader and ending his career as the Manager of Capital Budget and Planning. He retired after thirty-nine years of service. The foundations of Marvin’s life were faith and family. He and Penny were active at Greenforest Baptist Church in Decatur where Marvin served as a deacon and sang in the church choir. After their move to Grayson, they were active at Snellville First Baptist Church where Marvin again served as a deacon. They joined Smoke Rise Baptist Church in 1985 and were faithful members of The Seekers Sunday School class. After their retirement, Penny and Marvin were able to enjoy many years of travel with friends from church, and were active in the Georgia Power Ambassadors, where Marvin served as President for several years. The highlight of these years was the precious time they spent with their eight grandchildren and the frequent family gatherings they hosted. When Penny’s health began to decline, Marvin was always at her side, making sure her every need was met. A year after Penny’s death, Marvin moved to Dogwood Forest Assisted Living in Grayson where he enjoyed the company of his fellow residents and the loving care of the staff. Marvin was a hard-working man of quiet integrity and faithfulness. His kindness, selflessness, and devotion to his family serve as a shining example to his children and grandchildren and all those who knew him. He will be greatly missed. The funeral service to celebrate the life of Marvin James Burton will be held on Saturday, July 10, 2021 at 11:00 AM at Smoke Rise Baptist Church, 5901 Hugh Howell Road, Stone Mountain, Georgia 30087. Interment will follow at Eternal Hills Memory Gardens, Snellville, GA. The family will receive friends on Friday, July 9, 2021 from 4:00 PM until 8:00 PM at Tom M. Wages Snellville Chapel, Snellville, GA and also on Saturday, July 10, 2021 from 10:00 AM until 11:00 AM at the church. For those who prefer to make a memorial donation in lieu of flowers please consider a donation to The American Cancer Society, www.cancer.org or The Multiple Sclerosis Society, https://mscatl.org/donate/. Due to COVID-19 regulations, our staff is committed to taking care of our guests and families that we serve. We also ask all guests and family members attending visitations and services to please continue social distancing and if desired to bring and wear a mask. Condolences may be sent or viewed at www.wagesfuneralhome.com. Tom M. Wages Funeral Service, A Family Company, 3705 Highway 78 West, Snellville, GA 30039 (770-979-3200) has been entrusted with the arrangements.

Marvin Burton passed away on June 30 after a brief illness. Marvin is survived by his three children and their spouses, Jimmy (and Debbie) Burton, Karen (and Dale) Garner, and Teresa (and Keane) Cruce; eight grandchildren, Stephanie (and Alex)... View Obituary & Service Information

The family of Marvin Burton created this Life Tributes page to make it easy to share your memories.

Marvin Burton passed away on June 30 after a brief illness. Marvin...

Send flowers to the Burton family.