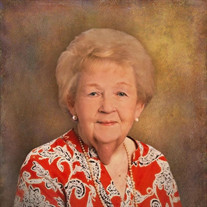 Please select this link to view the funeral service for Martha Shackleford Martha Geraldine “Jerry” Shackleford, age 88 of Lawrenceville, GA passed away on July 1, 2021. She was preceded in death by her husband, William R. “Bill” Shackleford, mother, Jimmie Lou Walker, father, Harold O. Gray and sister, Connie Becker. Jerry is survived by her daughters, Terry Whitehead (Rick Dial), Kimberly Rice (Bill Windsor), grandson, Cameron Whitehead and great-grandchildren, Dustyn Whitehead and Savannah Whitehead. In addition to her grandchildren and great-grandchildren, she is also survived by Chad Dial (Meredith), Emmie Wood (Bo), Erin Oches, Palmer Windsor and Myatt Dial along with many nieces and nephews. Jerry was born in Atlanta, GA, grew up in the Grant Park area and graduated from Roosevelt High School in 1951 where she formed many lifelong friendships. While in high school, Jerry was a majorette performing at both Roosevelt and Georgia Tech. In December 1951, she married her high school sweetheart, Bill. She retired from Atlanta City Schools after working many years as a school secretary. She was a member of the Joy Class at First United Methodist Church of Lawrenceville. After retirement, Jerry volunteered with DeKalb Medical Center and Grace Arbor, an adult day care program at FUMC Lawrenceville. In addition to many years of card games and league bowling, Jerry was an avid football fan always supporting the Atlanta Falcons and Georgia Tech Yellow Jackets. As a 51 year Falcons’ season ticket holder, she rarely missed a game and even followed them to London to watch them play. Jerry was an excellent southern cook but was best known for her cakes and was often referred to as the “cake lady”. As a self-made caterer, she made cakes for all occasions including countless weddings and birthdays. Her cakes were enjoyed by all. Visitation will be held on Tuesday, July 6th from 4-6pm. Funeral services will take place on Wednesday, July 7th at 11:00, with visitation one hour prior to the service. In lieu of flowers, memorial donations may be made to The American Heart Association, https://www.heart.org/?form=donate, or The American Cancer Society, https://donate3.cancer.org. The family would like to thank the staff at Garden Plaza of Lawrenceville and Dogwood Forest of Grayson for the kindness, loving care and friendship so freely given to Jerry. Condolences may be sent or viewed at www.wagesfuneralhome.com. Tom M. Wages Funeral Service, a Family Company, 3705 Highway 78 West, Snellville, GA 30039 (770-979-3200) has been entrusted with the arrangements.

The family of Martha Shackleford created this Life Tributes page to make it easy to share your memories.

Please select this link to view the funeral service for Martha...

Send flowers to the Shackleford family.