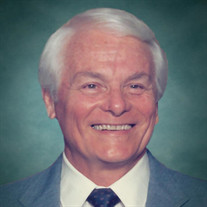 Mark M. Whayne, age 91, of Dacula GA passed away Saturday, April 24, 2021. He was preceded in death by his wife, Ruth Lovett Whayne. He is survived by his children, Greg Whayne (wife: Janet), Terry Bryant (husband: David); six grandchildren; ten great-grandchildren; one brother-in-law; and several nieces and nephews. Mark was born in Dallas, Texas, but moved to Georgia with his family when he was 9. He was a member of the class of 1948 at Roosevelt High. He attended Faith Memorial Church, which is where he met his wife. Later, he and Ruth joined Hemphill Church of God, which became Mount Paran. He and Ruth attended Mount Paran North for many years. Mark enjoyed providing music for his Sunday school class, singing along with Estelle and other talented friends. In his later years, when it became hard to make the long drive to Mount Paran North, he attended Hebron Church with his son and Neighborhood Church with his daughter. His passions were many. He was an artist, working in pastels, oils and watercolors, and loved to give his artwork away. He considered this his service to the Lord. He also loved to create in other ways. He wrote limericks, poems, and music. He even created his own line of cards (All Mark cards) to send to his friends and family on their birthdays, etc. He loved to draw cartoon pictures for his grandchildren. He enjoyed sports: Playing baseball, softball, and football in his younger years, then later tennis, which he played well into his seventies. He remained active even after two knee replacements. He coached several teams, Little League for his son and softball teams for church. He will be remembered for always, without fail, attending every single one of his children’s, grandchildren’s, and even great-grandchildren’s sporting events, documenting them with many photos. He was a great encourager. His grandchildren remember his generous spirit; always having candy, ice cream, or Cokes ready to share. He was even willing to let them play with his art and exercise equipment. His first job was a paper route for AJC. Later, he used his talent to paint signs or windows of stores for several companies. His customers were Walgreens, 7/11 Convenience stores and others. He was later hired by Georgia Power, in the Electrical Engineer department, where he designed Sub Stations. He also headed up their Blood Count program, working with the Red Cross to collect blood. In 1984, he became their Safety and Health adviser. He retired in 1986 and started a life of cruising the oceans with his wife and two other couples. He always loved to travel, even if he told you his wife nagged him into going. His laugh and smile will be missed. A graveside service will be held on Saturday, May 1, 2021 at 11:00 AM at Eternal Hills Memory Gardens, Snellville, GA. The family will receive friends on Saturday from 9:30 AM until 10:30 AM at Tom M. Wages Snellville Chapel, Snellville, GA. In lieu of flowers, memorial donations may be made to Mount Paran North Church, 1700 Allgood Rd NE, Marietta, GA 30062, https://mountparannorth.com/. Condolences may be sent or viewed at www.wagesfuneralhome.com. Tom M. Wages Funeral Service, A Family Company, 3705 Highway 78 West, Snellville, GA 30039 (770-979-3200) has been entrusted with the arrangements.

The family of Mark M. Whayne created this Life Tributes page to make it easy to share your memories.

Send flowers to the Whayne family.