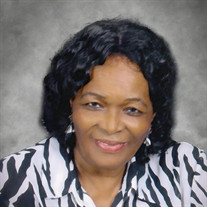 Lurline Louise Davis Lock was born on September 2, 1934 to Claude Davis and Mabel Patterson Hines in Duncans Trelawny, Jamaica. The eldest of 12 children, Lurline helped take care of her siblings. She developed a love and passion for her family, a quality she carried into her adult life. Lurline met Brian Lock, a handsome and wonderful British soldier in Jamaica. In 1961, the two lovebirds would later marry in England, and pursued a happy life together. While in England, Lurline worked in a shoe factory to make ends meet. However, she quickly got the entrepreneurial bug and purchased a candy shop in England. In 1969, Lurline and Brian moved to New York where she started working as an Avon salesperson. Lurline was very successful in this new endeavor for decades. Lurline, affectionately known as “Tuncy,” was loved by everyone she met. Although she was a no-nonsense character, there was a certain charisma and style about Lurline that captured you. She was a wonderful dancer, and if you have ever been to one of her parties, you know how much Lurline still loved to dance, even if that meant her rocking her hips while holding on to her cane. Lurline was truly the matriarch of her family. She made it a point to make it to everyone’s major occasion in their life, whether it be a wedding, baby shower, bridal shower, graduation, homegoing service and so on. There are very few people in her circle who she has not personally helped in some way to better their lives. For example, her address in New York housed many family members and friends at one point or another. Lurline was a lover of God and a faithful servant. When she moved to Lawrenceville, Lurline quickly made Prospect United Methodist Church her home. The members of the church became Lurline’s extended family. Lurline is survived by her son, Everaldo Stewart; grandsons, Richard Gibson, Lance Cunningham; granddaughter Natalie Graham. Included in this list are her great-grandchildren Jaidon Cunningham, Kacey Cunningham, Luna Cunningham, Ashlee Gibson and Dylan Gibson. Also survived by Lurline are sisters, Elsie Rutty, Olive McKenzie, Daphne Tate, Joyce Davis, Denise Davis; brothers, Rodney Hines, Albert Davis; not to mention countless cousins, nephews, nieces, aunts and uncles. A funeral service honoring the life of Lurline will be held on Saturday, November 6, 2021 at 3:00pm at Prospect United Methodist Church. The family will receive friends on Friday, November 5th from 6pm-8pm at Tom M. Wages Lawrenceville Chapel. Condolences may be sent or viewed at www.wagesfuneralhome.com. Tom M. Wages Funeral Service, 120 Scenic Hwy., Lawrenceville, GA 30046 (770-963-2411) has been entrusted with the arrangements

Lurline Louise Davis Lock was born on September 2, 1934 to Claude Davis and Mabel Patterson Hines in Duncans Trelawny, Jamaica. The eldest of 12 children, Lurline helped take care of her siblings. She developed a love and passion for her family,... View Obituary & Service Information

The family of Lurline Louise Lock created this Life Tributes page to make it easy to share your memories.

Lurline Louise Davis Lock was born on September 2, 1934 to Claude...

Send flowers to the Lock family.