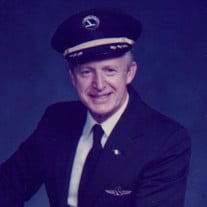 Eastern Airlines Captain L.A. Howard passed away Sunday, July 4, 2021. He is survived by his wife of 75 years, Louise W. Howard; sons and daughters in law, Martin L. (Grace) and Gregory L. (Cathy); grandchildren Zachary (Jamie) and Chelsea Howard; and 2 great granddaughters. His interest in flying started while in high school in Whitehouse, New Jersey. Each Sunday he watched a small airplane fly over his neighborhood and wave to people on the ground. He decided this was what he wanted to do, and made arrangements to start flying lessons in Pennsylvania. It was wartime and pilot training was not permitted on the East Coast. His paper route helped pay for his flying lessons. Upon completion of high school, he joined the US Army as an Air Corp Cadet, and graduated top of his class in gunnery school. He completed the cadet program as a B 25 pilot, and was stationed at the US Training Command Center. While in the Cadet training program, he was sent to Middle Georgia College in Cochran, GA where he met and married the love of his life, Louise Williams. They shared 75 wonderful years together. Following his military service, he flew a paper route from Macon, GA to locations all around South Georgia, dropping bags of papers in baseball fields along the way. This was the first air/mail drop service of its kind. In 1951, he joined Eastern Airlines, where he flew for 34 years, until retirement at age 60. When Eastern Airlines prepared to purchase the A 300 Airbus fleet, Captain Howard was part of the team sent to Toulouse, France to train to fly this new aircraft. His inaugural US flight was from Atlanta to San Francisco, a route he flew regularly until his retirement. Retirement from the commercial airline industry did not stop his flying. He was a member of the Commemorative Air Force, for 22 years, fifteen of which he served as the Operations Officer and flew war birds at air shows all over the southeast. He and his wife moved to Park Springs in 2004, where he remained very active. He belonged to Smoke rise Baptist Church in Stone Mountain and served in the Church audio department for 30 years. He was a member of the Retired Eastern Pilots Association, and the Eastern Airlines Retirees Association. A private graveside service was held with the family. A memorial celebration of life service will be held on Wednesday, August 18, 2021 at 2:00 PM at Park Springs Retirement Community, 500 Springhouse Cir, Stone Mountain, GA 30087. The family requests that in lieu of flowers memorial donations be made in memory of Captain L.A. Howard to Park Springs Foundation, https://www.parksprings.com/park-springs-foundation-benefits-employees-atlantas-premier-retirement-community/. Condolences may be sent or viewed at www.wagesfuneralhome.com. Tom M. Wages Funeral Service, A Family Company, 3705 Highway 78 West, Snellville, GA 30039 (770-979-3200) has been entrusted with the arrangements.

The family of Lou Howard created this Life Tributes page to make it easy to share your memories.

Send flowers to the Howard family.