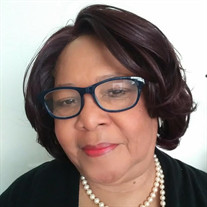 Please click here to view the service of Loretta Loretta Meares Brumfield was born on March 31, 1945 in Dundee, Florida to the late Isaac Rudolph Meares and Viola Meares. Loretta was the oldest child from this union and relocated with her parents and siblings to Sodus, NY around 1950. Loretta attended grade school in the rural farm community where her parents worked as migrant farmers on the Fletcher family Farms. She returned for a brief period of time to Florida and attended Booker T. Washington School in Inverness, Fl where she completed grade school. By 1960, Loretta had returned to Rochester, NY where she attended James Madison HS. Although reserved, Loretta was filled with strong leadership skills and joined The Lady El Quints, a club where she, her sister Barbara and friends would host parties and social events for teens. In 9th grade, at the water fountain during an assembly, she met her husband—Frederick Brumfield. They met at age 15 and celebrated their sweet 16 th birthday together at a house party hosted by Loretta’s mother and were married on October 19, 1963. Their marriage produced four children: Marnesa, Freddie Jr., Crystal and Shawnta. Together they raised their family in Rochester, NY where she was employed with Dollinger Corporation until 1988 when she opted for an early retirement as the plant relocated from Rochester. Loretta was deeply committed to her family. She enjoyed hosting gatherings such as Friday night spade games, holiday celebrations, birthday parties and taking weekend fishing trips with her husband and siblings. She also took pride in her award-winning garden. As her family grew, her home would often be filled with grandchildren whom she adored. In 2020, Loretta celebrated 57 years of marriage with her husband. She often said that her greatest accomplishments in life were her children and grandchildren but the best decision she ever made was to give her life to Christ. She felt as though the more grand kids and extended family she had, the richer she was. Loretta was raised in the Baptist faith and was a member of Aenon Baptist church under the pastoral leadership of Rev. Murphy Greer. It was there that she was baptized as a child. She recommitted her life to Christ in 1992 and became a member at New Creation Fellowship in Chili, NY under the pastoral leadership of Tom Pears. Here her faith and relationship with the Lord grew and she led in various ministries including information and guest services. She remained a member until she relocated to Atlanta, GA in 2004 where she became a devoted member of Victory Church in Norcross, GA and was active in various small group ministries. Loretta is predeceased by her mother Viola Meares, father Isaac Meares, her eldest sister Rosalee Kaham, and grandson Jawaun Brumfield Sr. She is survived by her husband Frederick Brumfield Sr., sister Barbara Dukes, brother Isaac (Denver) Mears Jr., her 4 children Marnesa (James) Giddeon, Frederick (Christina) Brumfield Jr.,Crystal (Timothy) Simpson , and Shawnta (Jamison) Harpp, and an honorary daughter Deborah Ayala-Braun. Loretta was also blessed with 19 grandchildren, 12 great-grandchildren, and many nieces and nephews. She also extended and received love from her church families and a host of friends. A funeral service honoring the life of Loretta will be held on Tuesday, March 2, 2021 at 12:00pm (Noon) at Tom M. Wages Lawrenceville Chapel with Rev. Olin Holly officiating. Interment will follow at East Shadowlawn Memorial Gardens. The family will receive friends on Tuesday, March 2nd from 11:00am until the time of service at 12:00pm. You can view the service which will be LiveStreamed either by going to the Tom M. Wages Facebook page or by clicking the blue link on the obituary page on our website. Due to the current COVID-19 regulations, our staff is committed to taking care of our guests and families that we serve. We ask that all guests and family members attending services to please bring and wear a mask. Condolences may be sent to or viewed at www.wagesfuneralhome.com. Tom M. Wages Funeral Service LLC, “A Family Company” 120 Scenic Hwy Lawrenceville, GA 770-963-2411 has been entrusted with the arrangements.

The family of Loretta Brumfield created this Life Tributes page to make it easy to share your memories.

Please click here to view the service of Loretta

Send flowers to the Brumfield family.