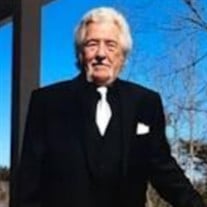 Not sure what to send?

Mr. William Lawrence McLean, age 81, passed away on January 10, 2022. Lawrence was born on October 26, 1940 in Atlanta, Fulton County, Georgia to parents Joseph Glen McLean and Willie Maddox McClean. Lawrence was baptized when he was 16 at Central Christian Church in Atlanta. He was educated in the Atlanta school system, graduating from Sylvan High School in 1958. While attending school he began working at age 8, first on a chicken farm, then as a shoeshine boy, and next bagging groceries at A&P. Lawrence married his high school sweetheart, Julia Maxine Quattlebaum, on September 16, 1958. After graduation Lawrence worked 14 years for Foot & Davies Printing Company and 18 years as a foreman for McDonald & Company. Lawrence’s work career impacted him physically, forcing him to retire on disability in 1991. After many surgeries and joint replacements, he became known as the Bionic Man. His work career, extraordinary ability to analyze mechanical problems, ability to repair almost anything, and his restless energy, made him a Jack of all trades. He was the family go-to man for electrical, plumbing, carpentry, welding, and auto repairs. If Lawrence made it, fixed it, or built it, you could depend on it for years to come. TV repairs, however, were a challenge. Lawrence enjoyed hunting, fishing, camping, and woodworking, as well as watching his kids play ball. He entertained other by doing the Hambone, but southern gospel music was truly his favorite. On January 1, 1984, Lawrence saved two girls ages 9 and 10 who had fallen into a frozen lake in Fayetteville, GA. Lawrence could not swim and feared water, but he managed to get the girls to shore after venturing out on the cracking ice himself, Lawrence was a hero that day, but he gave credit to his guardian angel for saving them all. Lawrence is survived by his wife of 63 year, Maxine Q. McLean; son, William Lawrence McClean, Jr. (Denise Glover McLean); son-in-law, Jeff John Bote’; grandchildren, Chad Lawrence McLean (Amanda), Derek Brannon McClean (Katie), Logan Glenn Bote’, Luke Maxwell Bote’; great-grandchildren, Issac Lawrence McClean and Kynzie Faith McClean; and Nephew, Greg McDonald. He was preceded in death by his parents Joseph Glen and Willie Martil McLean; daughter, Kathy Joyce Bote’; brother Glen McLean; and sister, Mary Frances McDonald (Gene). Lawrence married into and became a part of the Quattlebaum family as his wife Maxine had thirteen brothers and sisters. From this union, Lawrence also leaves behind many in-laws, nieces, and nephews who will miss him. The memorial service to Lawrence will be held at 2:00PM on Saturday, March 12, 2022 at Tom M. Wages Snellville Chapel, Snellville, GA. The family will receive friends for one hour beforehand until the hour of service. No interment. In lieu of flowers, donations in memory of Lawrence can be made to the American Heart Association, American Kidney Foundation, or American Cancer Society. Rest in peace now, Lawrence. God is in control. Due to COVID-19 regulations, our staff is committed to taking care of our guests and families that we serve. We also ask all guests and family members attending visitations and services to please continue social distancing and if desired to bring and wear a mask Condolences may be sent or viewed at www.wagesfuneralhome.com. Tom M. Wages Funeral Service, A Family Company, 3705 Highway 78 West, Snellville, GA 30039 (770-979-3200) has been entrusted with the arrangements.

Mr. William Lawrence McLean, age 81, passed away on January 10, 2022. Lawrence was born on October 26, 1940 in Atlanta, Fulton County, Georgia to parents Joseph Glen McLean and Willie Maddox McClean. Lawrence was baptized when he was 16 at... View Obituary & Service Information

The family of Lawrence McLean created this Life Tributes page to make it easy to share your memories.