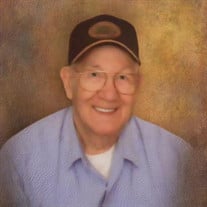 Larry P. Peevy, 88, of Elberton, GA, passed away on Saturday, February 29, 2020. Larry was born in Lawrenceville, GA in 1931, the son of Richard and Carrie (Hutchins) Peevy. He married his childhood sweetheart, Frances Elizabeth (Frankie) Moon, on December 24, 1948 and this past Christmas Eve celebrated 71 years of marriage! In addition to Frankie, Larry is survived by his children, Richard and Amy Peevy, of Lawrenceville, and Jennifer and Tim Norton, of Elberton. Larry, or Papa as he was called, was blessed with six grandchildren; Naomi, Elizabeth and Rachel Peevy, Hailey and Michael Emerson, Samantha and Keith Brannon, and Brad Norton, whom he affectionately called BooBoo, five great-grandchildren; Hannah, Logan, Mikaela, Emma, and Chloe; several nieces, nephews, cousins, and his best buddy, Jake, his dog. Larry was preceded in death by his beloved mother and father; his sister and brother-in-law, Dixie and Weyman Johnson; and several cousins and close friends. Larry lived most of his life in Gwinnett County. Married shortly after graduating from Snellville High School, he worked at Avon Products in Atlanta. Larry served in the US Army from 1952-1960, serving most of that time in Columbia, SC where his son, Ricky, was born. After the Army and Avon, Larry pursued several different avenues of self-employment. He and Frankie owned Ferlin Sales Company where he could be seen and heard auctioning at locations off of Hwy. 78 in Snellville and at the train depot in Lawrenceville. He owned and operated Chris’ House of Bargins in Monroe for several years. Larry was a storyteller. Anyone he met, especially in his later years, would come away, usually several hours later, with a nickname and a story. His tales were always colorful, sometimes leaving you with a questionable reflection of what was truth and what was fiction, always with humor and the wonderment of life growing up in the south. Of all the stories he’s shared, his greatest by far was that of his wife, Frankie. He LOVED her! As the story goes, he asked her to be his girl on the first day of first grade and they’ve been together ever since. 1 Corinthians 13:8 reminds us “Love never fails” Larry went home peacefully Saturday morning holding Frankie’s hand. Our family would like to thank the many angels who have come into Larry’s life, who have allowed the stories to continue. The doctors and staff at Oconee Heart and Vascular, Dr. Amit Shah, Dr. Moe Bishara, Brian Wade and Tommy DePriest, Affinis Hospice Care and the dedicated and loving family of nurses, CNA’s, dietary technicians and staff at Hartwell Health and Rehab. May God bless you all! A Celebration of Life Service will be held Friday, March 6, 2020 at 2:00 PM at Tom M. Wages Snellville Chapel, with Pastor Scott Mize officiating. Burial will follow at Mt. Zion Baptist Church Cemetery, Snellville, GA. The family will receive friends on Thursday, March 5, 2020 from 6:00 PM until 8:00 PM and Friday, March 6, 2020 from 12:00 PM until 2:00 PM at the funeral home. In lieu of flowers, please consider memorial donations to Bethel E Baptist Church, Elberton, GA, Emory Eye Center, www.eyecenter.emory.edu or The Susan G. Komen Breast Cancer Foundation, ww5.komen.org. Condolences may be sent or viewed at www.wagesfuneralhome.com. Tom M. Wages Funeral Service, LLC, A Family Company, 3705 Highway 78 West, Snellville, GA 30039 (770-979-3200) has been entrusted with the arrangements.

The family of Larry P. Peevy created this Life Tributes page to make it easy to share your memories.

Send flowers to the Peevy family.