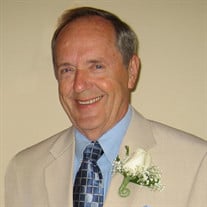 Kenneth Eugene “Gene” Fry, 87 of Snellville, GA, passed away peacefully at Pebblebrook at Park Springs, Stone Mountain, GA, on Sunday morning, April 18, 2021. He was born on September 9, 1933 in Ford City, PA, first child of Harold H. Fry and Edna Louise Keeton Fry. Ken was a military veteran having served four years in the Air Force, three of those years in Bremerhaven, Germany as a radio operator during the “Cold War”. Ken graduated from Penn State with BS Degree in Electrical Engineering and began his career with the General Electric Company as a Field Service Representative in the Ordnance Systems Division of the Fleet Ballistic Missile Program in Pittsfield, MA. He worked in several shipyards installing the Fire Controls Systems and testing in the Polaris, Trident I and Trident II submarines. Ken spent one year at the Redstone Arsenal, Huntsville, AL working on the Saturn IB rocket. Upon returning to Pittsfield, he worked in the test berth, testing the fire control systems before installation in submarines until his retirement from Lockheed Martin with 37 years of service. Ken’s dream was to live on a lake and that dream was fulfilled when he and Shirley moved to Smith Mountain Lake, Moneta, VA. He looked forward to family vacations and their many cruises with family. They enjoyed 21 years of lake life, before his dementia became too difficult for Shirley to care for him. Ken leaves behind his best friend and wife, Shirley Simmons Fry. Together they shared a beautiful journey for 64 years. His daughters, Pamela Hayes (Robert) GA, Regina Parisi (Mark) TN, Barbara Fry, MA, and son Kenneth Fry (Theresa) MI. He was very proud of his twelve grandchildren, Nicholas (Megan), William (Marta), Daniel (Kelley) and Michael (Megan) Hayes; Robert & Kristen Parisi, Forrest & Courtney Luscier, Victoria & Cecelia Pekarek, Sara & Kate Fry. He enjoyed his twelve great-grandchildren, Ella & Emerson Hayes, Drew, Nate & Jack Hayes, Sophia, Audrey, Charlotte & Chloe Hayes, Madeline & Marshall Hayes, and Payton Luscier; siblings; Joan Einsel, Robert Fry (Kathy), Diane (Dean) McCanna, Marilyn (Tom) Shilling; and many nieces and nephews. As per his request, there will be no funeral service. If you would like to make a donation, in his memory, the family chooses the following charity which gives 100% of the donation to Alzheimer research. For more information: https://curealz.org/giving/donate/ Condolences may be sent or viewed at www.wagesfuneralhome.com. Tom M. Wages Funeral Service, A Family Company, 3705 Highway 78 West, Snellville, GA 30039 (770-979-3200) has been entrusted with the arrangements.

The family of Kenneth Eugene "Gene" Fry created this Life Tributes page to make it easy to share your memories.

Send flowers to the Fry family.