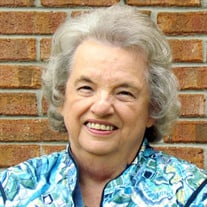 Judith Smathers Rogers, “Judy”, age 91, passed away on January 24, 2021 at her home in Snellville, GA. She was born in 1929 in Asheville, NC. She was preceded in death by her parents, Roy B. Smathers and Bertha Robinson Smathers; sister, Dortha Smathers Queen; nephew, Doug Queen; and her husband, William Rogers. She was raised in Canton, NC. She graduated from Pisgah High School and attended Mars Hill College. She worked at Champion Papers in Canton. Judy was married in 1950. She was very active in the Home and Garden Club in Canton. She and Bill moved to Atlanta, in the late 60’s, and lived there until moving to Knoxville, TN in 1976. They moved back to Atlanta in 1999. They both were Charter members of Kingswood United Methodist Church, in Dunwoody, GA, as well as First Farragut United Methodist Church, in Knoxville, TN. She is survived by their only daughter, Suzanne Rogers Wyatt and her husband Brian; grandchildren, Alex Wyatt, Jennifer and her husband David Flynn. She had two very special great-grandsons, Wyatt Flynn and Grant Flynn. She is also survived by her brother, Bruce and Sue Smathers; and four nieces, Diane Queen Justice, Sherry Queen Palmer, Kathy Smathers Eavenson, and Karen Smathers Best. Judy was a member of Cannon United Methodist Church, in Atlanta. She enjoyed scrapbooking and attending retreats with her daughter. A graveside service will be held on Friday, January 29, 2021 at 2:00 PM at Eternal Hills Memory Gardens, Snellville, GA. In lieu of flowers, memorial donations may be made to the Travis Mills Foundation, https://www.travismills.org/. You can view the service, which will be livestreamed on Facebook https://fb.me/e/x0aaoXm5. Condolences may be sent or viewed at www.wagesfuneralhome.com. Tom M. Wages Funeral Service, A Family Company, 3705 Highway 78 West, Snellville, GA 30039 (770-979-3200) has been entrusted with the arrangements.

The family of Judith Smathers Rogers created this Life Tributes page to make it easy to share your memories.

Send flowers to the Rogers family.