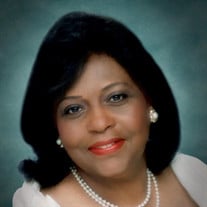 Josette Perrier David, 88 years old, of Lawrenceville, GA, passed away on April 18th, 2022, from natural causes. Visitation will be held at the Tom M. Wages Lawrenceville Chapel on April 27th, 2022 from 12:00 noon to 1:30 PM. The funeral mass will follow at St. Lawrence Church at 2:00 PM where Father Henry will be officiating. The burial will follow at East Shadowlawn Memorial Gardens at 3:00 PM. Funeral arrangements are being handled by Tom M. Wages Funeral Services. Josette was born in Cap-Haitien on April 9th, 1934. She went to school at the distinguished Sainte Rose de Lima primary and secondary school in Port-au-Prince, Haiti, where she graduated with honors. After studying as a noviciate for religious life, she changed course to become a teacher in her alma mater. Josette was married to Gerard David on December 22nd, 1962; they were married for 45 years. Josette’s story exemplifies the American dream. She immigrated to the United States with her husband, Gerard, in the late 1960s. They settled in Queens, New York, where they raised a family, bought a home and maintained close ties with family members and friends who also settled in the melting pot they call the Big Apple. She worked in banking at La Banque Nationale de Paris, New York for 29 years. Her proficiency in French, natural intelligence, hard work and perseverance allowed her to advance from her initial job as bank teller to assistant treasurer at her retirement. Josette will be remembered for her jovial disposition, her thoughtfulness and kindness, her generosity, her wisdom, her great sense of humor, her infectious laugh and overall good and loving nature. In addition to her hobbies of sewing, conversing with family members, and watching slapstick comedies (her favorite being “Three’s Company”), she found solace and strength in her daily attendance to mass and devotions to the Divine Mercy Chaplet. Josette is survived by her children, Bernard, Marie Dominique and Christine; her grandchildren, Diana, Jose Jr., Nathalie, Bernard Jr., and Christian; her siblings, Harry, Marlene, Nicole, Fritz; her sons-in-law, Jose and Brian; and other family and friends. Josette is preceded in death by her husband, Gerard; her parents, Joseph Perrier and Anne Leone Cabeche Perrier; and her brothers, Serge and Marcel Perrier. In lieu of flowers memorial donations may be given to St Vincent de Paul, www.svdpgeorgia.org or Catholic Charity foundations. Condolences may be sent or viewed at www.wagesfuneralhome.com. Tom M. Wages Funeral Service, 120 Scenic Hwy., Lawrenceville, GA 30046 (770-963-2411) has been entrusted with the arrangements.

Josette Perrier David, 88 years old, of Lawrenceville, GA, passed away on April 18th, 2022, from natural causes. Visitation will be held at the Tom M. Wages Lawrenceville Chapel on April 27th, 2022 from 12:00 noon to 1:30 PM. The funeral... View Obituary & Service Information

The family of Josette P. David created this Life Tributes page to make it easy to share your memories.

Send flowers to the David family.