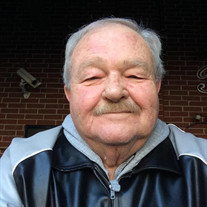 Joseph D. Rappold, left this world peacefully, surrounded by his family, at his home in Dacula, Georgia, on Sept. 24, 2021. He was 73. He was born Jan. 17, 1948, in Huntington, West Virginia, the son of the late Audrey Grace and Charles Leo Rappold. He graduated from Oak Ridge High School in Orlando, FL in June, 1965. With a firm conviction that he was doing the right thing for his country, he enlisted in the U.S. Navy along with his brother James "Jimbo" Rappold, in 1966. The two would be almost inseparable during his 4 years of service, which included a tour of duty in the waters off Vietnam aboard the U.S.S. Constellation. He married Sandra Van Ess in July 1971 and worked his way up in the plastics manufacturing industry, eventually rising to plant manager while raising three children and working his way through college. He graduated from National College of Education with a Bachelor of Arts in 1985. His career took the family all over the country, to Illinois to Indiana to Pennsylvania and finally to Lawrenceville, Georgia, with companies Sonoco, Boise Cascade and finally Greif Brothers. He retired in 2015 from Greif Brothers, Lavonia, GA after 17 years. Joe loved NASCAR, and everything about racing, working on and driving his classic MGB, watching Penn State and Pittsburgh Steelers football, and most of all family. Though work often required long absences from home, he accepted it because he knew he was providing a better life for his wife and children. And work never stopped him from family time: grilling brats in the freezing sleet at Chicago Bears games; family boat rides on the Susquehanna River when the boat always seemed to break down; camping as assistant scoutmaster with his boys; cozy extended family gatherings at Christmas; beach trips in the Outer Banks, even when he was no longer able to walk down to the sand. Sadly, Joe suffered more loss than anyone should ever bear, including his son, mother, both brothers and, in 2018, the loss of his wife to cancer. He steered the family through these rough waters despite a broken heart. He was a longtime member of Mckendree United Methodist Church in Lawrenceville, GA. Joe leaves behind his son Scott and daughter-in law Lynnea Rappold, of Del Norte, Colorado; daughter Lindsay and son-in-law Chris Brown; and granddaughters Madelyn, Sadie and Caroline, all of Hoschton, Georgia. He was preceded in death by his son Jeffrey, wife Sandra and brothers Jim and Charles. A memorial service will be held Saturday, October 2 at Tom M. Wages Funeral Home, 120 Scenic Highway, Lawrenceville, GA 30046. The family will receive friends starting at 12:30 p.m. with the memorial service at 2:00 PM. In lieu of flowers, donations may be made to: Heroes First Foundation 2905 Pacific Drive Norcross, GA 300071 Attn: John Kahren Joe will be heartily missed by friends and family. As the sailors say, "May you have fair winds and following seas." Condolences may be sent or viewed at www.wagesfuneralhome.com. Tom M. Wages Funeral Service, 120 Scenic Hwy., Lawrenceville, GA 30046 (770-963-2411) has been entrusted with the arrangements.

Joseph D. Rappold, left this world peacefully, surrounded by his family, at his home in Dacula, Georgia, on Sept. 24, 2021. He was 73. He was born Jan. 17, 1948, in Huntington, West Virginia, the son of the late Audrey Grace and Charles Leo... View Obituary & Service Information

The family of Joseph D. Rappold created this Life Tributes page to make it easy to share your memories.

Send flowers to the Rappold family.