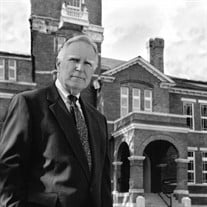 To view the service of Jones via Livestream please click on the link https://youtu.be/T9EFg-eKzIw Jones Webb, Attorney-at-Law, Ret., entered eternal rest on Friday, February 25, 2022, at his home surrounded by loved ones. He was preceded in... View Obituary & Service Information

The family of Jones Webb created this Life Tributes page to make it easy to share your memories.

To view the service of Jones via Livestream please click on the...

Send flowers to the Webb family.