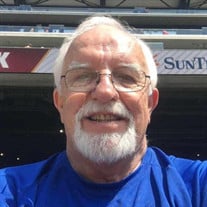 Please click here to view the services for John via Livestream John William Tully, November 18, 1946, passed away May 10 at his home in Lawrenceville, Georgia. Mr. Tully served as a member of the United States Airforce during Vietnam and later served as a fireman for the Reynoldsburg, OH Fire Department. As a fireman, he taught at the National Fire Academy, State of Ohio Fire Academy and also taught fire safety at Columbus Ohio College. After retiring from the fire department, he held many roles. He worked with the Congressional Fire Service, sat on the FEMA board, and held positions in the private sector at Scott Health Safety, ISI, and Bullard. Mr. Tully was a hard working man, and after official retirement, loved his part-time security job at the Gwinnett Arena. Mr. Tully was preceded in death by his parents, Lucy and James Tully, his sister, Rebecca Cenname (Rob Cenname), and nephews, Joshua McDaniel and Alan Vanmeter. He was the beloved husband, of almost (June) 45 years, to his wife, Catherine. He was the loving father to his two daughters, Emily Tully (Lawrenceville, GA) and Heather Tully Watts (Lawrenceville, GA), and a very proud grandpa to Catherine (Cat) Hendershot (Lawrenceville, GA). In addition to his wife, daughters, and granddaughter, Mr. Tully is survived by his brother, George and Jan Tully (Converse, TX), sister, Barbara and Danny Carpenter (Westerville, OH), sister, Monica McDaniel (Cardington, OH). Additionally, he is survived by his brother-in-law, William and Jill Watson (Lexington, KY), brother-in-law, Paul Watson (Pensacola, FL), sister-in-law, Gloria Hergert (North Ridgeville, OH) and sister-in-law, Elsie and Bruce Vanmeter. He is also survived by nieces and nephews, Sarah, Jason, Robert, Amanda, Quinn, Angela, Robert, Bobby, William, Zachary, Mollie, Jennifer, Caitlyn, Sarah, Mackenie, Matt, Austin, Allison, Justin and several great-nieces and nephews. Mr. Tully was well loved and will be greatly missed by many. His home was always open and he treated everyone like they were part of his family while making each person feel uniquely loved. A funeral service honoring the life of John will be held on Saturday, May 15, 2021 at 6:00pm at Tom M. Wages Lawrenceville Chapel. In lieu of flowers, donations may be made to the John Tully Memorial Fund at https://gofund.me/3841c417 Condolences may be sent to or viewed at www.wagesfuneralhome.com. Tom M. Wages Funeral Service LLC, “A Family Company”, 120 Scenic Hwy Lawrenceville, GA, 770-963-2411, has been entrusted with the arrangements.

The family of John William Tully created this Life Tributes page to make it easy to share your memories.

Please click here to view the services for John via Livestream

Send flowers to the Tully family.