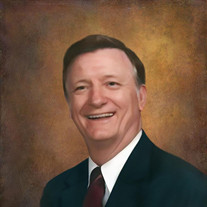 The family appreciates your prayers during this time. John Richard Owens, Jr., age 88 of Acworth, GA, passed away early Easter Sunday, April 17, 2022. Mr. Owens is survived by his devoted wife of 63 years, Jayne R. Owens; his 2 children and their (spouses), Randy Owens (Caren), Kathy Keller (Pat); 7 grandchildren, Patrick Keller (Emma), Aubree Owens, Andrew Keller, Shelby Thibodeaux (Nick), Hannah Watford (Kyle), Cooper Meitz and Brady Meitz; 4 great grandchildren, Jaxon, Noah, Paisleigh, and Beckett; sister, Ruby Joyce Gantt; sister-in-law, Cheryl Russell (Bob); niece, Vicki Kerr (Bobby); and nephew, Ricky Gantt (Elaine). John was born in Augusta, Georgia, on January 21, 1934. While serving in the U.S. Air Force in the Panama Canal Zone from 1953 to 1956, he was ordained as a deacon at First Baptist Church in Balboa Heights. It was there that he met Jayne. They were married in 1958 while he was attending Furman University. After graduating from Furman, they went to Southwestern Theological Seminary. John was called to serve as Youth Education Minister at First Baptist Church in Balboa Heights, Canal Zone. John and Jayne were blessed with two precious children while he served in Panama. After being on the ministerial staff at Rainbow Park Baptist Church in Decatur, he accepted an invitation from Smoke Rise Baptist to be the Minister of Education. During his time at Smoke Rise people grew to love him for his outgoing personality, his gregarious nature, and spirit of serving others. You could hear him whistle through the halls of the church almost every day. After retiring, John continued his zest for life RV’ing with his wife and grandchildren, wood working in his basement workshop for hours, and making the most of his time with his family. He and Jayne moved to Acworth to be closer to family and enjoy time with them. The funeral service to celebrate the life of John Richard Owens, Jr., will be held on Friday, April 22, 2022 at 1:00 PM at Smoke Rise Baptist Church, Stone Mountain, GA. To livestream the service please select this link: https://smokerisebaptist.org/john-owens/ The family will receive friends on Friday, April 22, 2022 from 11:00 AM until 1:00 PM at the church prior to the service. For those who desire to make a memorial donation in lieu of flowers please consider a donation to Smoke Rise Baptist Church, 5901 Hugh Howell Road, Stone Mountain, GA, 30087, (for online gifts - https://secure.myvanco.com/L-Z2NB/campaign/C-12BT8). Condolences may be sent or viewed at www.wagesfuneralhome.com. Tom M. Wages Funeral Service, LLC, A Family Company, 3705 Highway 78 West, Snellville, GA 30039 (770-979-3200) has been entrusted with the arrangements.

The family of John Richard Owens Jr created this Life Tributes page to make it easy to share your memories.

Send flowers to the Owens family.