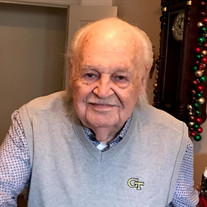 John "Jay" Winfred King, Jr., age 89, of Lawrenceville, GA. "touched the face of Jesus" & passed peacefully of natural causes on the morning of March 30, 2021. He almost made it to his 90th birthday, but God had other plans. Jay is survived by his wife of almost 53 years, Brenda Lawrence King; Sons, Craig & Kellie King, Islamorada, FL; John W. III & Cindy King, Covington, GA; Grandchildren, Clay & Dedra West, Cleveland, GA, Chelsey West, Flowery Branch, GA & Cypress, TX., Jillian & Jerry Callahan, Jefferson, GA., Jenna & Daniel Perry, Jefferson, GA, Breanne & Michael Watts, Beaufort, SC, & Craiger King, Islamorada, FL; John W. IV & Kay King, Atlanta, GA, Josh & Melissa King, Covington, GA; 15 Great Grandchildren; Brother, Charles King, Loganville, GA; many nieces & nephews on both sides that he dearly loved; as well as 2 brothers-in-law and 4 sisters-in-law whom he considered “his own brothers and sisters” and a host of other family & friends. He was preceded in death by Daughter, Cathy West, Grand Daughter, Tricia West; parents, Mr. & Mrs. John W. Sr & Hattie Moore King, infant brother; & Carolyn King, mother of his three children. Jay was born in East Atlanta, GA, on May 8, 1931. Jay's mother would give him & Charles 3 Capitola tokens that came from Capitol Flour sacks, worth a nickel, and they would walk to the Euclid Theatre and use those tokens to see a movie and get a bag of popcorn. Jay's Dad knew Frank Gordy & got him his first job at age 15 at the Varsity in downtown Atlanta and his dad would pick him up from work at 2:00 AM in the morning & Charles would ride in the back seat so he could get a frosted orange drink. He graduated from Murphy High School and lettered in four sports of which he was always proud. He served in the Navy 4 years, stationed in Atlanta & Kodiak, Alaska, he graduated from GA TECH and majored in Industrial Engineering. While a student at GA Tech, he chose the Varsity as one of his projects for a Time & Motion Study. He was an Operations Manager with BellSouth (AT&T) and retired in 1987. He was a member of the North East GA Mountaineers Telephone Pioneers organization. He loved the Atlanta Braves and he, Brenda and his family enjoyed attending spring training for over 15 years, as well as visiting every spring training facility in Florida. Together they enjoyed many cruises, with the last one going to Nassau, in May, 2014, to attend their grandson's wedding. He loved going to Panama City to our house that he and his sons & many family members helped build, especially when any of the grand & great grands could come. Of course he enjoyed GA TECH football and never missed a home game for many years. Most of all, he loved his family, camping and fishing with his boys, helping them as teenagers in their part time construction jobs, attending all their Little League and Berkmar HS football games, where Craig played defense, Johnny was a quarterback and Cathy a majorette. As well as attending all the grandchildren's football games & videoing all the games of John & Josh. Every year, you would see Jay working hard in his garden and planting various vegetables. He had such a green thumb and thoroughly enjoyed his gardening and sharing his fruits of labor with his family and friends. He was looking forward to planting his tomatoes and peppers. He loved his grandbabies and was probably the best Grandpa or “Grumpy Butt” (a nickname his granddaughter, Jenna gave to him, that he loved and they had lots of laughs over it) that anyone could ask for. "He was a huge force in their lives & he had no doubt how much each grandchild loved him." He was also known as “JJ”, a special name that his nephew, Chris came up with over 47 years ago, and it stuck with him until the day he passed. Jay and Brenda took in Snowball, who was his grandson Craiger’s cat. Snowball lived with them for the last six years, and two weeks before Jay passed, Brenda told Jay that they were going to have to let Snowball go and he replied, “can we wait just one more day”, she agreed, and Snowball passed six days before Jay did. Snowball was 18 but 88 in human years. So now, Snowball and Grandpa, are resting in peace together. He was a good man, had a kind and generous heart, with a great sense of humor and never met a stranger. Jay & his brother Charles are members of the First Families of Gwinnett. He was a member of Prospect United Methodist Church, Lawrenceville, where his Grandfather helped build the church. The King family expresses our gratitude for all the help by caregivers, Beatrice Karangwa & Lydia Ininahazwe, as well as Ana Diffut, The Atlanta Family Hospice, PC Dr. Jay Desai. & loving family & neighbors. DO TO SAFETY CONCERNS OF THOSE ATTENDING, a celebration of Jay's life will be held at a later date at Prospect United Methodist Church. In lieu of flowers, donations may be made to Prospect United Methodist, or a Charity of your choice. Due to the current COVID-19 regulations, our staff is committed to taking care of our guests and families that we serve. We ask that all guests and family members attending services to please bring and wear a mask. Condolences may be sent to or viewed at www.wagesfuneralhome.com. Tom M. Wages Funeral Service LLC, “A Family Company”, 120 Scenic Hwy Lawrenceville, GA, 770-963-2411, has been entrusted with the arrangements. IN CONSIDERATION OF THE FAMILY AND THE CHURCH CONGREGATION MASKS ARE REQUIRED FOR THE MEMORIAL SERVICE.

John "Jay" Winfred King, Jr., age 89, of Lawrenceville, GA. "touched the face of Jesus" & passed peacefully of natural causes on the morning of March 30, 2021. He almost made it to his 90th birthday, but God had other plans. Jay is survived... View Obituary & Service Information

The family of John "Jay" W. King created this Life Tributes page to make it easy to share your memories.

Send flowers to the King family.