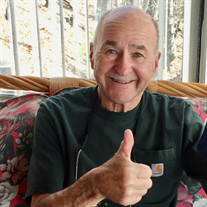 John Jancuski, surrounded by family, went home to be with the Lord on January 18, 2022, at Emory University Hospital in Atlanta, Georgia. He was 82. John was born on August 28, 1939 in New Eagle, Pennsylvania to John and Helen Alexander Jancuski, and was raised in Finleyville, Pennsylvania. After graduating from Pennsylvania State University in 1961, he was commissioned as an officer in the U.S. Navy the same year. As a Navy pilot, John served two (2) tours in the Vietnam War aboard the aircraft carrier USS Kittyhawk. On June 16, 1962, John married Suzanne (Suzy) Louise Curtis of Arlington, Virginia. After serving over eight years on active duty, John continued service to his country in the U.S. Navy Reserves, retiring in November 1983 at the rank of Captain (O6). In 1970, John relocated his family to Stone Mountain, Georgia upon embarking on a 28 ½ year career as a pilot with Delta Airlines. An avid tennis player, John loved to travel and experience the various cultures of the world with his beloved, Suzy. In 1999, John retired from Delta Airlines at the rank of Captain and, together with Suzy, decided to build a log cabin on the top of a North Georgia mountain ridge. Their family cabin, nicknamed “The Eagles Nest,” immediately became a place to rest and enjoy God’s creation with family and friends. John enjoyed going anywhere in his red BMW Z3 … with the top down, of course. A loving husband and father, trusted friend, and the oldest of two, he is preceded in death by his parents. He is survived by his bride of 59 ½ years; his brother, three children, five grandchildren, and three great-grandchildren: brother, Danny Jancuski (Mary Ann) of Gastonville, Pennsylvania; son, Robert Jancuski of Middlesex, North Carolina; daughter, Jill Althoff (Michael) of Hendersonville, North Carolina; and daughter, Julie Maher of Stone Mountain, Georgia; grandchildren: Kyle and Abby Althoff, Julianna and John Robert Jancuski, and Hailey Maher; great-grandchildren: Brayden, Colton and Jaxson Althoff. John was an esophageal cancer survivor, having been diagnosed and treated in 1996. John and his family were blessed with 25 years of additional life after his cancer treatment, a wonderful gift that enabled John not only to meet and have relationships with all of his grandchildren, and two of his great grandchildren, but also led John to surrender his life to Jesus Christ. A Celebration of Life will be held on Tuesday, January 25th, at 11:00am, at Crossroads Presbyterian Church, 5587 Redan Road, Stone Mountain, Georgia. The service will be livestreamed at www.crossroads-pc.com. There will be a mask mandate for the service, which will be limited to 75 attendees. A burial service at Arlington National Cemetery, Arlington, Virginia, with full military honors, will be forthcoming at date yet to be determined. In lieu of flowers, donations can be made in memory of John to the Wounded Warrior Project, www.woundedwarriorproject.org. Condolences to the family may be expressed at wagesfuneralhome.com.

John Jancuski, surrounded by family, went home to be with the Lord on January 18, 2022, at Emory University Hospital in Atlanta, Georgia. He was 82. John was born on August 28, 1939 in New Eagle, Pennsylvania to John and Helen Alexander Jancuski,... View Obituary & Service Information

The family of John Jancuski created this Life Tributes page to make it easy to share your memories.

John Jancuski, surrounded by family, went home to be with the...

Send flowers to the Jancuski family.