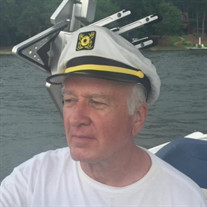 When reflecting upon his life, it is impossible to think about John Gallagher without connecting him to thoughts of family, friends, and the love he shared with his wife, Mary. Those who knew him well never questioned his priorities: his family,... View Obituary & Service Information

The family of John Michael Gallagher created this Life Tributes page to make it easy to share your memories.

When reflecting upon his life, it is impossible to think about...

Send flowers to the Gallagher family.