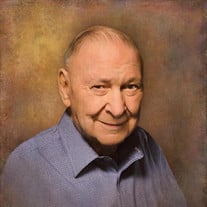 Please select this link to view the Celebration of Life Service for John " Dan" Bankston John Daniel “Dan” Bankston, age 91, of Lilburn, GA. passed away on Tuesday, February 8, 2022 at his home. He was preceded in death by his wife of 68 years, Patricia Maxine Sexton Bankston; parents, Glenn and Jossa Ewing Bankston; brothers, Jerry L. Bankston and Larry G. Bankston. Dan is survived by his three children, Pat (Diane) Bankston, Linda (Bill) Lovell and Rick (Tess) Bankston; six grandchildren; eleven great grandchildren; one great great grandchild; sister, Glyndia Norton; sister-in- law, Jane Bankston; his loving companion, Lynnette Ireland, her five children, Connie (Johnny) Tuggle, Dianne (Don) Fitzgerald, Cindy (Mike) Kister, Robin (Wilson) Whitlock and Jeff (Eddie Ray) Costley. John Daniel “Dan” Bankston was born on October 28, 1930 in Snellville, Georgia, the eldest child of Glenn and Jossa Ewing Bankston. Dan grew up in Gwinnett County on the family farm which he and his brothers and mother worked while his father worked at General Shoe Store in Lawrenceville. It was during that time that he decided that he did not want to work on a farm. He graduated from the old Snellville School and married his wife, Maxine and attended John Marshall Law School. Upon returning to Atlanta he worked for Sears, Parker and Davis Drug Company and finally retiring with 33 years’ service with the Lanier Company installing equipment in Doctors’ Offices and Hospitals. Dan had many hobbies which included houseboats (owned two over the years at Lake Lanier), airplanes had a 1961 Cessna, 1967 Blanka-Super Viking and sold it in 1976), motorcycle (bought it on a Saturday and wrecked it the next Saturday), and cars. He had a 1942 Hudson and a 1961 Cadillac (Batmobile). “Dan the Man” enjoyed life and spending time with his friends and family. He and his wife, Maxine were involved with the Shriner’s for many years. Following Maxine’s death, he and Lynnette Ireland enjoyed a beautiful, special friendship. The Service to Celebrate and Honor the Life of Dan Bankston will be held on Monday, February 14, 2022 at 2:00 PM at Tom M. Wages Snellville Chapel with Dr. Ronny Spiller officiating. Interment will follow at Eternal Hills Memory Gardens. The family will receive friends on Monday, February 14, 2022 from noon until the hour of the service at the funeral home. In lieu of flowers the family request that you consider a memorial donation to Shriner’s Hospital, www.lovetotherescue.org in memory of John Daniel “Dan” Bankston. Due to COVID-19 regulations, our staff is committed to taking care of our families and their guests that we serve. We ask all family members and guests attending the visitations and service to please continue social distancing and if desired to bring and wear a mask. Condolences may be sent or viewed at www.wagesfuneralhome.com. Tom M. Wages Funeral Service, A Family Company, 3705 Highway 78 West, Snellville, GA 30039 (770-979-3200) has been entrusted with the arrangements.

The family of John "Dan" Bankston created this Life Tributes page to make it easy to share your memories.

[Please select this link to view the Celebration of Life Service...

Send flowers to the Bankston family.