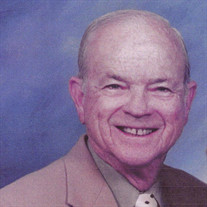 Jesse Reed Aldridge, Jr., age 95 of Snellville, GA, passed away Thursday, April 29, 2021. He was preceded in death by his parents, Jesse R. Aldridge, Sr. and Nancy Aldridge; his sister, Peggy Pidanich; and daughter, Katherine Aldridge Leonard (Terry). He is survived by his wife of 70 years, Eleanor Bell Aldridge; sister, Kathleen Ramsey; 2 daughters, Nancy Aldridge Wright (Timothy) and Cindy Aldridge Clark (David); grandchildren, Reed Wright (Christy), Rebecca Meagher (Jamie), Rachael Broadway (Mike), James Clark and Robert Clark; 5 great-grandchildren; a niece and two nephews. Jesse proudly served his country as a Merchant Marine during WWII and in the Air Force during the Korean War. He had a distinguished career with the National Weather Service. A significant achievement of his career was as a member of the team who developed the first weather radar. Jesse was a devoted husband and father. He was a Christian and was admired by his family and friends. He enjoyed all outdoor activities, especially golf, which he played throughout his life and into his eighties. The family would like to thank the caregivers at the Sheridan at Eastside Gwinnett for the wonderful compassionate care that was given to Mr. Aldridge, during his stay there. The memorial service to celebrate the life of Jesse Reed Aldridge, Jr., will be held on Wednesday, May 19, 2021 at 2:00 PM at University Church of Christ, 5315 Atlanta Highway, Montgomery, AL 36109. In lieu of flowers, please consider a donation made, in memory of Jesse Aldridge, to the Alzheimer’s Association, www.alz.org or University Church of Christ Benevolent fund, 5315 Atlanta Highway, Montgomery, Al 36109. Condolences may be sent or viewed at www.wagesfuneralhome.com. Tom M. Wages Funeral Service, A Family Company, 3705 Highway 78 West, Snellville, GA 30039 (770-979-3200) has been entrusted with the arrangements.

The family of Jesse Reed Aldridge, Jr. created this Life Tributes page to make it easy to share your memories.

Send flowers to the Aldridge, family.