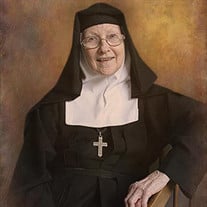 Sister Jane Frances Williams, VHM our former Superior for 9 years, passed away at 3:17 am on the morning of August 29, 2021 after Sister had been bedridden for approximately 2months. Her death was very peaceful. Her Superior, Mother Teresa Maria Kulangara, was with her for her last look and breath. Mary Patricia Spillman was born February 23, 1931 in Hartshorne, Oklahoma, where her uncle was the only doctor in the county. She was the eldest of Maurine Spillman, an opera singer, and later teacher, and her husband Marvin Spillman, who owned a lumberyard. Her younger brother Jack became a famous artist, who resides in New York. Patricia began the serious study of vocal music performance while in high school in Tulsa, and was still a teenager when her excellent soprano voice was heard on the opera stage, in church and on the radio. Patricia converted to Catholicism at 16, although she had to wait till 18 to be baptized. She married Dennis Huntley Williams, a Tulsa native, and he himself convert to the faith. A graduate of Missouri Military Academy and Benedictine College at Atchinson, Dennis was an Army Colonel, then Army Reserve Colonel. He later became a Lobyist for NFIB. They were married for 42 years, having 10 children. A year after Dennis death, Patricia entered our Monastery of the Visitation here at Maryfield in Snellville, Georgia in January 1994. She made the 1st Vows on June 29, 1996, and her Final Vows on June 29th 1999. Sister Jane Frances was named after our Foundress, who was also a widow and Religious. Sister was a model Religious, always happy to do whatever obedience asked of her. She loved her family and children, and loved her Community. She worked in the Host Room, baking and cutting the Altar Breads, packing and shipping them for several years. She also worked in ceramics, creating beautiful Nativity scenes, and statues, etc. Sister became Superior in 2008, being also at the same time, Novice Mistress, Infirmarian, Procuratrix (seeing to all the needs of the Sisters and Monastery). An amazingly gifted person of great intelligence, and delightful character. A woman of great faith, and great love. The family will receive friends on Friday, September 3, 2021 from 1:00 PM until 4:00 PM at Sisters of the Visitation, Snellville, GA. The holy rosary will follow on Friday at 7:00 PM. The funeral service will be held on Saturday, September 4, 2021 at 10:00 AM at Sisters of the Visitation. Interment will be held at Monastery of the Visitation. Due to COVID-19 regulations, our staff is committed to taking care of our guests and families that we serve. We also ask all guests and family members attending visitations and services to please continue social distancing and if desired to bring and wear a mask. Condolences may be sent or viewed at www.wagesfuneralhome.com. Tom M. Wages Funeral Service, A Family Company, 3705 Highway 78 West, Snellville, GA 30039 (770-979-3200) has been entrusted with the arrangements.

Sister Jane Frances Williams, VHM our former Superior for 9 years, passed away at 3:17 am on the morning of August 29, 2021 after Sister had been bedridden for approximately 2months. Her death was very peaceful. Her Superior, Mother Teresa Maria... View Obituary & Service Information

The family of Sister Jane Frances Williams, VHM created this Life Tributes page to make it easy to share your memories.