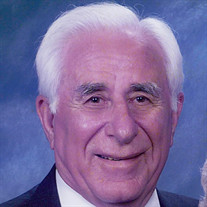 James Thomas Trotter, age 95 of Lilburn, GA, passed away peacefully Sunday, October 10, 2021. He was preceded in death by his parents, Emmitt and Lee Anna Trotter; brothers and sisters in law, Russell Lee and Mary Trotter and Douglas and Carolyn Trotter; son and daughter in law, James (Jim) Edward and Elinore Trotter; and his beloved wife of seventy-three years, Dorothy (Dot) Jo Trotter. He is survived by his son and daughter in law, Larry and Myong Trotter; 5 grandchildren and spouses, Tiffany Rackley (Josh), John Trotter (Ashley), Adrian Wilkins (Chad), Shari Trotter (and fiancé Brett and step children to be, Belle and Jack) and Ronnie Trotter (Alyssa); 5 great grandchildren, Parker, Cadence, Kate, Hailey and Reagan; brothers and their spouses, Harold Trotter (Betty) and Tommie Trotter (Pat); as well as several nieces and nephews. The service honoring the life of James Trotter will be held on Wednesday, October 13, 2021, at 1:00 PM at Yellow River Baptist Church at 3650 Five Forks Trickum Road, SW, Lilburn, GA 30047 with Mark Davis, Associate Pastor officiating. Interment will follow at Gwinnett Memorial Park at 925 Lawrenceville Highway, Lawrenceville, GA 30046. Family members will gather at Tom M. Wages Snellville Chapel, 3705 Highway 78, West, Snellville, GA 30039 at 12 Noon for a brief time together before traveling to Yellow River Baptist Church for the funeral service. James lived a life filled with wonderful memories of his family and friends. He had a special fondness for his Yellow River church family where he and Dot, his wife, were long time members and where he faithfully served as a deacon for over thirty years. He also served honorably as a World War II veteran in the United States Army. James’ family rejoices greatly in his home going for “and to be absent from the body is to be at home with the Lord.” was his greatest hope. Due to COVID-19 regulations, our staff is committed to taking care of our guests and families that we serve. We also ask all guests and family members attending visitations and services to please continue social distancing and if desired to bring and wear a mask. Condolences may be sent or viewed at www.wagesfuneralhome.com. Tom M. Wages Funeral Service, A Family Company, 3705 Highway 78 West, Snellville, GA 30039 (770-979-3200) has been entrusted with the arrangements.

James Thomas Trotter, age 95 of Lilburn, GA, passed away peacefully Sunday, October 10, 2021. He was preceded in death by his parents, Emmitt and Lee Anna Trotter; brothers and sisters in law, Russell Lee and Mary Trotter and Douglas and Carolyn... View Obituary & Service Information

The family of James T. Trotter created this Life Tributes page to make it easy to share your memories.

Send flowers to the Trotter family.