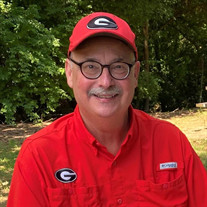 James Marvin Pruitt, Jr, age 74, our precious husband, father, brother, and friend, passed away Sunday morning, August 1, 2021 after a sudden illness. His beloved wife Ann was at his side over the entire two weeks and was there when he died. Despite strict Covid hospital restrictions, his son Mike and sister Angie were given the gift of precious time with Jim in his last days. We are grieving with heartbreak over the loss of our bright, strong, witty, and kind Jim. Jim was the third child and only son born to James and Anna Belle Pruitt of Atlanta, Georgia on July 15, 1947. He is survived by his lifelong wife and partner, Ann Cross Pruitt; son Michael Andrew Pruitt (Mike), Santa Cruz, California; sister Mary Pruitt Sharp, Georgetown, Texas; sister Dr. Angela Pruitt Clark, Austin, Texas; and brother-in-law Clyde L. Prestwood, Jr, Austin Texas. He was greatly influenced by the Southern culture, was a proud Atlantan, and lived in the greater Atlanta area his entire life with the last years in Lawrenceville, Georgia. He graduated from Avondale High School, then off to the University of Georgia in Athens where he became a forever Georgia bulldog fan. He was a perfect fit for the definition of a sports fanatic: exhibiting excessive enthusiasm and intense devotion to his Dawgs. He graduated from the University of Georgia with a Bachelor of Business Administration (BBA) in 1969 and then added a Master’s of Business Administration (MBA) in 1971. He was a member of the Phi Kappa Phi Honor Society. In addition to his intelligence, he was highly organized in all aspects of his life and work. He applied his skills and business knowledge with a career start at Armour and Company in their Atlanta office but turned down a promotion that would mean leaving his beloved Atlanta. Soon after, he took an administrative position in the corporate headquarters at the beautiful Davison’s/Macy’s department store on Peachtree Street in downtown Atlanta where he worked for 21 years. His financial skills as the Internal Auditor were applied to inventory control of the merchandise that came into the store. After retirement from Macy’s, he continued freelance work with teams who conducted financial audits of numerous companies. Despite growing up about one mile apart and attending the same Baptist church, Jim and Ann never dated until they re-met at the University of Georgia in 1967. They married in 1970 and remained together for 50 years as partners for life. They were a perfect match--both loved the University of Georgia, college sports, entertaining friends, traveling, adventures, and time with family. Jim was a longtime season ticket holder of University of Georgia football and basketball. Until last year, he had attended every home football game since 1980 and most away games. He loved tailgating with his Bulldog family. His greatest pride was his son Mike who inherited his father’s creative side, attending the University of Georgia and graduating with a bachelor’s degree in Landscape Architecture. His designs have won several awards in California which Jim spoke of often. Jim’s father complained that he sent his son off to college in his freshman year assuming him to be a good Republican, but at the first Christmas break, it was clear that Jim would be a lifelong Democrat. Growing up in Atlanta during the Civil Rights movement in the 1960s influenced his beliefs and support for equal rights. Jim worked as a volunteer for Bill Clinton’s reelection campaign and one of his prized possessions was a photo with President Clinton. He loved to travel on long car road trips, avoiding air travel when possible. He and Ann visited 48 states in the U.S. including 41 National Parks. He was a lifelong member of the Sierra Club. Coastal areas and beaches were favorites. He enjoyed visiting his son Mike in California and made trips to Texas to see his two sisters and their husbands (Roy Sharp, now deceased). One of his favorite Texas activities over several years was touring many of the top BBQ restaurants near Austin. Around 1995, he and Ann moved to Coopers Pond neighborhood in Lawrenceville. He loved gardening and spent many hours tending his yard. He was active in the Coopers Pond neighborhood activities, selected as Neighbor of the Year in 2019. He set up recycling programs for neighborhood facilities, helped to manage the float on the Pond every Christmas, participated in Memorial Day Parades, and loved his neighbors as well as the neighborhood. He was always willing to help a neighbor in need. He was a natural lover of life, parties, and loved to entertain! His wry sense of humor amused so many friends and family over the years. He and Ann made a formidable pair in setting up festive environments for fun with friends and neighbors--inside, outside, pond or Tahiti--didn’t matter--he could create the scene. He made Killer Margaritas and being on their party list was an honor. Two weeks before his illness began, he was living life to the fullest including hosting an outdoor 4th of July event in their backyard. Jim was a compassionate soul and such a good man--we will always love him and will miss him dearly. Donations in his memory can be made to the American Heart Association or the Sierra Club in the name of Jim Pruitt. Friends and family are cordially invited to a Celebration of Life gathering, Sunday August 15th from 2 pm till 4 pm at the Coopers Pond Clubhouse, 97 Coopers Pond Drive, Lawrenceville. Casual red and black attire encouraged, and please, vaccinated guests only. Condolences may be sent or viewed at www.wagesfuneralhome.com. Tom M. Wages Funeral Service, A Family Company, 3705 Highway 78 West, Snellville, GA 30039 (770-979-3200) has been entrusted with the arrangements.

James Marvin Pruitt, Jr, age 74, our precious husband, father, brother, and friend, passed away Sunday morning, August 1, 2021 after a sudden illness. His beloved wife Ann was at his side over the entire two weeks and was there when he died.... View Obituary & Service Information

The family of James Marvin Pruitt, Jr. created this Life Tributes page to make it easy to share your memories.

Send flowers to the Pruitt, family.